How to Become the Best! 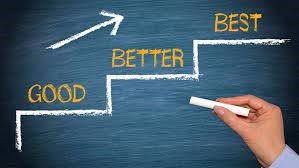 "When she had let him drink his fill, she said, ‘I will also draw for your camels, until they finish drinking.’" (Bereishis 24:19)

I asked Yosef to lend me money, which he did. That was a chesed, a kindness, but not “a complete” chesed.

I asked Boruch to help me study for a test. He spent three hours with me, helping me. That was a chesed, but not “a complete” chesed.

I asked Meir for a big favor, which he promptly did, exactly as I had requested. He drove three hours to an upstate park. He hiked a four-mile trail, in the hot sun. At the end of the trail, he jumped into the stream and swam for two miles. He reached a campsite and retrieved an item that I had left behind. That was a chesed, but not “a complete” chesed.

Before Pesach, someone came to Rabbi Yosef Dov Soloveitchik zt”l, and asked him, ”Does a person fulfill the obligation of drinking the four cups with milk instead of wine?” The Rabbi said no and handed the man a large sum of money. Afterwards, Rabbi Soloveitchik was asked why he gave the man so much money if all the man needed was money to buy wine. Rabbi Soloveitchik answered that if the man was planning on using milk, clearly, he didn’t have the money for meat. Therefore, he gave him enough money to buy all his seder needs. That was a chesed, and WAS “a complete” chesed.

The Midrash Yalkut Shimoni (perek 18) discusses the great reward for doing chesed. On the third day, after our forefather Avraham performed a bris mila on himself, three “men” appeared. Avraham showered them with kindness. Avraham gave them a place to rest and provided them with food and water. These “men” were angels and did not need Avraham’s acts of kindness. Yet Avraham was richly rewarded for his actions. Many years later, when the Jewish People were redeemed from Egypt and were in the desert, Hashem gave them manna (miraculous food), the Well of Miriam, quails, and the Clouds of Glory. The Jews received all this in the merit of Avraham’s kindness to the angels whom he thought were men.

If someone performs an act of kindness to a person who truly needs it, imagine how much greater his reward will be!

In this week’s parsha, Eliezer went to the city of Aram Naharayim to look for a bride for Yitzchak. When Rivka came to the well, Eliezer asked her to please give him a drink from her pitcher of water. After giving Eliezer a drink, she offered to provide water for Eliezer’s ten camels.

The Ralbag (Beraishis 24:19) learns from this pasuk the quality which makes a person into the best possible servant or the complete ba’al chesed (one who is involved in many acts of kindness). That is when one can anticipate another person’s needs and helps them before being asked. The Ralbag says that one can be the most obedient servant, doing everything that he is asked, yet he is not considered the complete servant unless he can anticipate his master’s needs and then act upon it.

Rivka excelled in this middah as evidenced by the way she did acts of kindness without being asked and with the same alacrity as if she had been asked. She was a complete ba’alas chesed, worthy of becoming one of our Matriarch’s.

King Saul’s son, Yonatan, lacked this middah, to some extent. Yonatan had a tremendous feeling of love and devotion for Dovid. His mind was probably pre-occupied because he had to tell Dovid to flee from King Saul, for his life. Yet, he overlooked the fact that Dovid, while fleeing, needed food. Dovid had to go looking for food. That ultimately brought about the tragedy with Nov, the city of Kohanim. The Talmud (Sanhedrin 104A) says, had Yonatan given Dovid two loaves of bread, the city of Nov would not have been wiped out. Rav Yehuda says in the name of Rav, “Had Yonatan lent Dovid two loaves of bread when he was fleeing Saul, David would not have sought sustenance from the priests in Nov. The residents of Nov would not have been killed, and Doeg the Edomite would not have been banished from the World-to-Come, and Saul and his three sons would not have been killed as punishment for that massacre.”

Every act of kindness we do for others is very special and is richly rewarded by Hashem. If we are exceedingly kind and do many acts of kindness, we are considered a ba’al chesed. We can be considered a complete ba’al chesed when we strive to notice, anticipate, and provide for the needs of others, even before we are asked.