Scale the Highest Mountains and Smile! 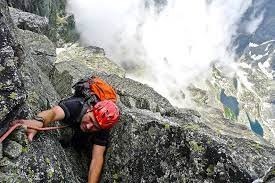 "It was when Yitzchak had become old, and his eyes dimmed from seeing." (Bereishis 27:1)

A person passes away and his neshama (soul) ascends upward. He is shown a scale that weighs his actions. He listens as a Heavenly voice calls out and announces that all the merits that he has done his entire life should go onto the right side of the scale. Another Heavenly voice announces that all his transgressions should go on the left side of the scale. When the person sees that the transgressions far outweigh his merits, he will be frightened that he will considered a rasha (evil person). At that point, another Heavenly voice announces that all his yissurim, suffering and challenges, that he had during his lifetime, should also go on the right side of the scale. When he sees that now, the right side of the scale is heavier, he will be happy. Through the yissurim he gained a spiritual cleansing for many of his transgressions, and [thereby] retains the status of a tzadik. He would be grateful and thankful to Hashem for each one of the yissurim that he had received!

When we experience difficult challenges in life, we must understand that they are actually gifts from Hashem. They should motivate us to think over our actions, seeing how we can improve. The challenges may also help cleanse us from some of our sins, necessitating less punishment in the World to Come, and hastening receiving our eternal rewards.

At times, minimal yissurim are all that are needed to encourage us to re-evaluate our actions or to cleanse of from some sin. The Talmud (Erchin 16b) discusses what is considered the least amount of pain that is included in the definition of suffering. Rabbi Elazar says it’s if someone wove a garment for you and it did not fit properly. The Sages said that even a lesser inconvenience is still considered suffering. For example, if you wanted your wine diluted with hot water, but it was accidentally diluted with cold water, it is considered suffering. Rava said, it is even if you reached your hand into your pocket to take out three coins, but you took two coins instead, it is considered a form of suffering.

The Midrash (Bereishis Rabbah 65:9) tells us that our forefather Yitzchak asked Hashem to give yissurim, pain and suffering, to people. Yitzchak said, “Master of the Universe, if a person dies without having had yissurim then Hashem’s attribute of justice will punish him harshly [in the next World].” Yitzchak asked Hashem to please give challenges and hardships to people while they were still alive. That would mitigate the harsh punishment that one would receive in the next world. Hashem responded that it was a good idea. Hashem agreed to give people yissurim and Hashem started with YItzchak. Thus, Yitzchak became blind.

Rabbi Shimshon Chaim Nachmani zt”l, in his sefer Zera Shimshon, asks, what does it mean that there were no yissurim before Yitzchak asked for them? The Egyptian galus was already decreed. A harsh exile lasting for hundreds of years is certainly yissurim.

The Zera Shimshon answers that until Yitzchak’s request, a person was cleansed of sin through yissurim of the soul, which took place in the World to Come. Physical afflictions were given to remind a person to improve his ways, but not to purify him from his sins. Yitzchak asked Hashem for physical yissurim to counterbalance the strict justice that awaits a person at death. Hashem concurred with Yitzchak, thus making him blind. This would help Yitzchak atone for any sins he may have done. According to one explanation in the Midrash (Bereishis Rabbah 65:10), the blindness gave Yitzchak atonement for the sin of looking at Hashem’s Holy Presence when his father Avraham had brought him as a sacrifice. (Zera Shimshon 2 by Rabbi Nachman Seltzer)

The Chofetz Chaim zt”l says (Sheim Olam — Chap. 3) that this request from our forefather Yitzchak for yissurim should be a great comfort for those who are dealing with yissurim. We see that even Yitzchak was afraid of the trait of judgment. Therefore, every person needs to see the justice in the judgment from Heaven, and to accept their yissurim with love.

Rabbi Asher Resnik (from Aish HaTorah) notes, when people think about yissurim, they often try to simply cope with them and endure them. However, there are numerous sources which teach us that yissurim are the ultimate expression of Hashem’s love for us. The Torah says, “And you should know with your heart, that just like a parent gives yissurim to his child, Hashem your G-d gives you yissurim.”  (Devarim 8:5) The comparison of Hashem to a parent teaches us that yissurim are always given from love, and exclusively for our benefit. The Talmud (Nidah 31a) brings an analogy of two men who were about to travel on a boat. A thorn embedded itself in the foot of the first and he could not travel. He cursed his bad luck as the second one managed to go on the ship. Sometime later, he heard that the ship had sunk, and all aboard had been lost. He then began to praise Hashem, since he saw that he had been kept alive through his mishap. Therefore, one should always accept yissurim with joy since one never knows what future benefit will come to him from them. (Jewish Clarity: Oxygen for the Soul)

The Chofetz Chaim zt”l  (Sheim Olam — Chap. 3) says that every aspect of pain that one encounters, including from other people, is all from Hashem to help atone for one’s transgressions. Hashem does all of this for our benefit. When carefully considering this, rather than thinking about how to get back at the person who hurt him, one should give thanks to Hashem for arranging this.

We experience challenges and suffering in life. Sometimes, they are so difficult that we don’t know how to cope. If we can focus on this idea that it is all a gift from Hashem, for our benefit, that will help us. That may even help us smile, as we envision each difficulty cleansing us, preparing us to receive the eternal good.