A Recipe for a Happy Marriage! 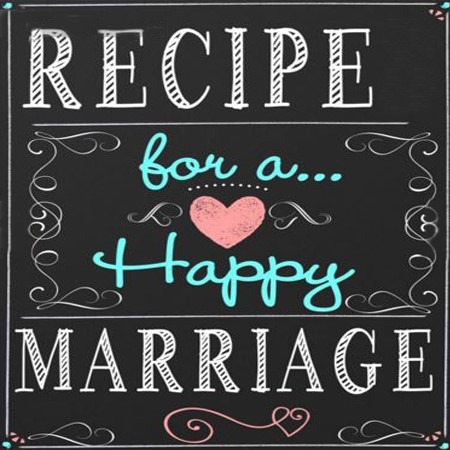 Yosef and Sara were very poor. The only real meal that they ate the entire week was on Shabbos. One Friday night, as Sara was bringing the food to the table she slipped. All the food spilled to the floor and could not be salvaged. Sara was so sad that she stayed on the floor, with her head down, ready to cry. She felt, how could she look at her husband’s face when she just ruined ALL their food.  There was no more food to bring in from the kitchen.  As she sat on the floor, her husband started singing Aishel Chayil (“a Woman of Valor” a special song many husbands sing to their wives on Friday night). Yosef sang the song slowly and with love in his voice. Sara looked up and smiled. Yosef’s reaction could have been to tell his wife to be more careful or even to just show her a sad face. Either reaction would have been a normal response. Yet, either action would have also made Sara feel bad and sad. Instead, Yosef IGNORED what had happened and didn’t even show any displeasure. He changed the uncomfortable moment to one that made his wife feel happy and loved. He built and strengthened their relationship instead of somewhat weakening it. There was something that Yosef and Sara had wanted very much and for which they had davened to Hashem repeatedly. After this incident of inner greatness, Yosef’s prayers were answered.

The three guests asked Avraham where his wife was. Rashi quotes the Talmud as saying that the guests knew where Sara was. They knew that she remained in her tent, due to modesty. If so, why did they ask Avraham where she was? They wanted to emphasize her modesty to Avraham.  They wanted him to feel good about his wife’s modesty and further endear her to him.

Rabbi Henach Leibowitz zt”l pointed out the following. Avraham and Sara had been married for many years.  They already had a close relationship with each other. Yet, the first words the angels said were meant to endear Sara to Avraham even more. How much more could their words have made a difference in Avraham’s relationship with Sara? Especially since Avraham already knew that Sara was a tznua, a very modest woman (see Rashi, perek 12 pasuk 11). We learn from this episode a fundamental principle in the relationship between husband and wife (or in the relationship of any two people who are close to each other). Every positive comment, albeit small, can affect a relationship.  Even a strong, loving relationship can be enhanced by a compliment made about a spouse or to a spouse.

A few p’sukim later Hashem asked Avraham why Sara laughed at the news that she would have a child, saying that she was too old. Rashi quotes the Talmud as saying that Hashem changed her statement for the sake of maintaining peace. Sara had actually said that she was too old, and that Avraham was also too old. When Hashem had repeated her words to Avraham, Hashem left out her words that her husband was also too old. This omission was considered a lack of truth and would have been forbidden if not for the fact that it was said to maintain peace. Rav Henach Leibowitz zt”l, again, pointed out that Avraham and Sara had a very close relationship with each other. Furthermore, obviously Avraham was very old and not likely to beget children. Also, Sara had said, “And my master [Avraham] is old”. She prefaced her comment about Avraham being aged with a term of total respect. Why did Hashem feel it necessary to modify her statement for the sake of maintaining peace? Again, we see a fundamental principle in the relationship between husband and wife. We see the importance of Shalom Bayis, a peaceful relationship. Even if the relationship is excellent, any small comment, even seemingly insignificant, can have an impact. Even such a small comment could have potentially made a tiny impact on the peaceful relationship between Avraham and Sara.  That is why Hashem omitted those words from Sara’s initial statement.

We must be so sensitive to the feelings of others. Even a small, negative comment can hurt another person’s feelings. On the other hand, every smile or compliment can make someone else feel good. Our actions and words make such a difference to others!