A Daily Battle of Epic Proportions! 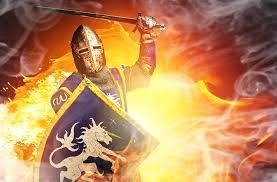 Haman entered, and the king asked him, “What should be done for a man whom the king desires to honor?” Haman thought in his heart, “Whom would the king desire to honor more than me?” (Megillas Esther 6:6)

This Shabbos we read Megillas Koheles. The Midrash Rabbah (Koheles 5:2) contrasts the actions of reshaim, wicked people, and tzadikim, righteous people. Reshaim are controlled by their heart. The Yefe Toar explains that they are controlled by their emotions and desires. “… Haman said belibo, in his heart, and Esau said belibo, in his heart”. Tzadikim, on the other hand, control their hearts and emotions with their intellect. “Chana spoke to her heart and King David spoke to his heart”.

The Midrash Rabbah continues. Haman went to King Achashverosh early in the morning to request that Mordechai be hung. Achashverosh pre-empted Haman’s request by asking him what to do for a person that he wished to honor. Haman’s heart was desirous. He assumed that the king wished to honor him. Immediately, he answered that the person should be dressed in the royal garments that the king wore on the day of his coronation. He should also ride on the horse that the king rode on the day of his coronation. Furthermore, the king’s crown should be placed on his head. Haman was very smart, but his desires clouded his better judgment. Achashverosh saw-through Haman’s suggestions, realizing that Haman wanted these royal honors for himself. In fact, Achashverosh was so upset that his face turned colors when Haman mentioned the king’s crown. What intelligent person would even think of asking for those coveted items that are so special and unique to the king? Yet, Haman’s personal desires clouded his better judgment and that is what he asked for.

Chana, on the other hand, controlled her emotions. She followed her intellect and acted appropriately. Chana and Penina were co-wives of Elkanah. Every year, Chana would go to the Beis HaMikdash with her husband. Penina had many children, but Chana had none. Penina felt bad for Chana. She said a few things to Chana to motivate Chana to beseech Hashem more intensely. The Eitz Yosef quoting the Yefe Toar explains, that Chana was very pained and agitated by Penina’s words. Emotions swirling, Chana wanted to scream out loud to Hashem, to beg for a child. However, she understood that screaming within the Beis Hamikdash would be a lack of respect. Thus, she controlled her emotions. She davened fervently, but silently.

King David also controlled his emotions, allowing his intellect to control his heart. Before David became king, King Shaul tried to kill him. (One of Shaul’s close advisors had poisoned his mind against David.) David told himself that he must escape, by leaving the Land of Israel. He felt in his heart that he should not leave. Emotionally, he felt that Hashem was with him and would save his life. If King Shaul would keep pursuing him to kill him, then David, having no other choice, would have to kill King Shaul. After all, the Torah permits a person to take pre-emptive action to kill a person who is trying to kill him. These were the emotions that were swirling in David’s heart. However, after thinking the matter over, he realized that he could not bring himself to kill King Shaul, who had been anointed by Hashem. If that was the case, then David was potentially in mortal danger. Therefore, David followed his intellect and determined that he did have to run away, outside the Land of Israel (Yefe Toar).

We fight a similar battle, numerous times every day, in our relationship with Hashem and with the people around us. Our emotions are screaming that we must act a certain way. We can follow what our heart is telling us, but that is not always the proper thing to do. We must stop and think logically if this is the appropriate course of action. It is not so easy to ignore the emotions that we feel in our heart. It’s a battle. We must work hard, trying our best to win each battle. Following one’s intellect and tempering one’s emotions is the right course of action. It will also be beneficial to us. For example, if our boss, our good friend, or our spouse says a hurtful comment to us, our emotions will be swirling. If we follow our emotions, we may respond in an attacking and hurtful way. That can negatively affect our job and our relationships. If we follow our intellect, we may understand that this is not the best time to respond, when we feel so hurt. We may be able to wait and respond when we are calmer. That would save us from the harmful ramifications that would surely, otherwise follow. Perhaps, we may even decide to forego our comments, realizing that the words said to us were said in the heat of emotion. The boss, friend, or spouse lost control of themself, but truly still has respect, admiration, and love for us.

We must always think before we act! We must control our emotions!

That will help us in our service to Hashem and in our interpersonal relationships.