I Crossed the Busy Street and Was Not Hit by the Car! 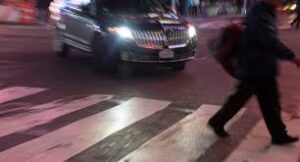 “I did not know; my soul placed me upon chariots of my noble people.” Shir Hashirim (6:12)

I heard a beautiful story from Rabbi Moshe Yosef Gruenstein, of Project Heritage (recorded on Torah Anytime.com). A man came into shul one morning with small cakes and a bottle of schnaps. When he was asked why he had brought it, he replied that it was to celebrate a special occasion. He had crossed a busy street and was hit by a car. However, nothing had happened to him! He had not gotten hurt! He brought some refreshments to share and express his hakaras hatov, appreciation, to Hashem for his personal miracle. The next morning, another man also came to shul with cakes and schnaps. When he was asked why he had brought them, he gave a different reply than his friend. He said that for the past twenty years, he had been crossing the same street that his friend had. In all that time, a car did NOT hit him. He too wanted to show appreciation to Hashem for the bad that did NOT happen!

There is another story about a very poor Jewish man who was brought to the attention of the king. The king was impressed with him and appointed him to a royal position. The Jewish man was very wise. Before long, the king appointed him to be his royal advisor. This appointment made the other ministers, who were not Jewish, jealous. They slandered the Jewish advisor to the king, saying that he was stealing money from the royal treasury. The king believed his other ministers. They searched the Jewish minister’s home but did not find any of the supposed stolen wealth. When they approached a locked door, they were sure that the money was hidden in that room. They broke the door and entered the room. To their astonishment, the room was almost bare. All it contained was a table, chair, and some tattered clothes. The king asked his Jewish minister to explain the contents of the room. The minister explained that the tattered clothes were the clothes that he had worn before he was appointed to a royal position. Every day he entered the room and put on the tattered clothes. He wanted to remember his past poverty so that he would remain humble and not feel arrogance due to his current, high office. He wanted to remember his past difficulties to help him further appreciate his current rise to power.

On Shabbos of Chol HaMoed Pesach we read Shir Hashirim. The pasuk in Shir Hashirim (6:12) states, “I did not know; my soul placed me upon chariots of my noble people”. The Midrash Rabba (Shir Hashirim 6:1) quotes Rabbi Chiya who explains this pasuk with a parable. There was once a princess who was forsaken. She had to work in a lowly occupation to earn money for food. Once, the king passed and recognized that she was his daughter. He sent his minister to bring her back to the palace in the royal carriage. Her friends were astonished at this turn of events. They said that yesterday she had been gathering leftover sheaves and today she was in the carriage with the king. She said to them: “Just as you are astonished about me, so I am astonished about myself.” The princess did not respond that she was a princess and that she belonged in the carriage of the king. Rather, her response was that she too could not comprehend her rise until she realized that the carriage was sent by her father.

Similarly, when the Jews were in Egypt, they were enslaved, working with mortar and bricks.  They were contemptible in the eyes of the Egyptians. When Hashem freed them and they were redeemed, they became elevated over all mankind. The nations of the world were astonished beyond belief. “Yesterday you were working with mortar and bricks, and despised, and now you have become free men, elevated over the entire world?” The Jewish People responded, “Just as you are astonished about us, so are we astonished about ourselves.” They didn’t know why they deserved to be elevated to such greatness. They realized that it was only due to Hashem’s lovingkindness.

The Midrash brings Yosef Hatzadik and King David as further examples. Yosef became the second in command over all of Egypt. King David sat on his throne. Both were raised to lofty positions of power yet did not take anything for granted. They did not attribute their successes to their own righteousness or wisdom. They were not arrogant. They realized that their success was only due to Hashem’s kindness (Midrash Rabbah as explained by the commentary Yaffe Kol). Recalling their low beginnings increased their appreciation of Hashem’s kindness in raising them to positions of prominence.

Some feel that it is best to forget an unpleasant past. We see from this dvar torah that we should remember it and contrast it with the pleasant present. That will magnify our appreciation of Hashem’s great kindness of salvation.

our past difficulties and how Hashem helped us.

(based on a dvar Torah by Rabbi Henach Leibowitz zt”l)