The Conductor of the Orchestra! 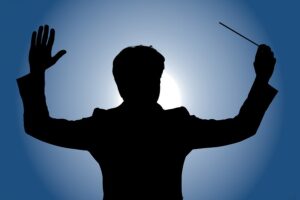 “And Hashem had remembered Sarah… Sarah conceived and bore a son to Avraham….” Breishis (21:1-2)

This past week, someone sent me a thirty second video clip. An elderly woman was sitting on a bench in front of an apartment building. She dropped her cane which fell a few feet away from her. She noticed a non-Jewish, teenage boy nearby.  He was standing, leaning on a pole, and munching on a candy bar. She asked him if he would pick up her cane. Although he said yes, he continued munching on his candy bar, seemingly ignoring the situation. The elderly lady shrugged her shoulders, laboriously got up, walked the few feet away from the bench with difficulty, and bent down to retrieve her cane. As soon as she did so, there was a loud crash. A piano fell from the building and crashed onto the bench that she had been sitting on moments before. Clearly, Hashem had orchestrated the lady’s cane to fall away from the bench, forcing her to move away from the bench, thus saving her life.

Hashem orchestrates many such events for us, as well.

On the first day of Rosh Hashana the Torah reading discusses Hashem miraculously enabling ninety-year old Sarah to have a child. The Torah tells us about this event immediately after telling us about a difficult event in Sarah’s life. Avimelech, King of Gerrar, forcibly took Sarah into his palace. Hashem protected Sarah from abuse. Hashem appeared to Avimelech in a dream and told him that he would die for taking a married woman. Furthermore, at Sarah’s behest, Hashem sealed all the body openings of Avimelech and all Avimelech’s people. Avimelech returned Sarah to Avraham, together with many gifts of appeasement. Whereupon, Avraham prayed to Hashem who reopened all their body openings. After Avraham’s prayers, the Torah tells us that Hashem opened Sarah’s womb, enabling her to give birth to a child.

Why does the Torah connect these two episodes in a sequence? Why does the Torah tell us about Avimelech, followed by Sarah giving birth? Rashi learns a beautiful lesson from this. If you pray to Hashem for someone else, when you yourself have the same need, then Hashem responds to your needs first. Avraham davened that the openings in Avimelech’s body be reopened. In response, Hashem then opened Sarah’s womb. How do we know that Avraham was answered first? The Gur Aryeh, quoting Rashi in the Talmud (Bava Kama 92B) proves it from the Torah’s wording.  It should have said “vayifkad Hashem es Sarah”, that Hashem remembered Sarah. Instead, it said “Va’Hashem Pakad” means that Hashem already responded to Sarah’s need, before responding to Avimelech’s need.

According to Rashi, it seems that Sarah gave birth because of Avraham’s prayers on behalf of Avimelech. The Ohr HaChaim, as well as the Gur Aryeh, question Rashi’s explanation.  Had Hashem not already promised Avraham that Sarah would give birth, irrespective of Avraham’s prayer for Avimelech? The Ohr HaChaim explains, Hashem had already promised that Avraham would have a child. To create that desired outcome, Hashem provided Avraham with the opportunity to daven for another. That mitzvah that Hashem gave, was the force which triggered the desired result, namely the birth of a child to the barren Sarah. The Ohr HaChaim says, in general, when Hashem wants to do a specific good for someone, Hashem arranges for that person to have the opportunity to do a specific mitzvah. The result of that mitzvah will bring the person the good that Hashem wants to give him. The Gur Aryeh explains in a similar manner, with a twist.  Hashem purposely placed Sarah in the uncomfortable position of being taken into Avimelech’s palace. Hashem did so, even though it also provided an opening for scoffers to claim that Yitzchok was Avimelech’s child (In order to disprove their claims, Hashem caused Yitzchak to look just like his true father, Avraham). The resulting effect of being in this uncomfortable position was that Avraham prayed for Avimelech.  That prayer, for another, resulted in Avraham being answered first, and having a child.

The explanation of the Ohr HaChaim and Gur Aryeh give an understanding into the workings of Hashem.

At times, Hashem will create a situation which seems negative and hurtful to us.

Yet, Hashem’s intent is for that situation to cause us to respond in a way which will bring blessing into our lives!

That “hurtful” situation will end up being the trigger for extreme happiness!