Why Can’t You Do Anything Right?! 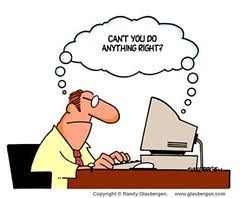 There is a famous story told about Rabbi Yisroel Meir HaCohen Kagan, the Chofetz Chaim zt”l. Once, when traveling from city to city, he came to an inn. While he and his traveling companion were sitting, he noticed a Jew whose behavior was very crude and uncultured. The Jew banged on his table, demanding food. When he got his food, he gulped it down without washing his hands or saying a bracha. Then he took a long drink of whiskey, drinking directly from the bottle.

The Chofetz Chaim asked the innkeeper who the man was. The innkeeper told him that there was no point in speaking with him. He had grown up among the Russian peasants and was ignorant about Judaism. He had been kidnapped by the officials of Russian Czar Nicolas when he was only seven years old. He was forced to remain in the Russian army for twenty-five years. The army continuously tried to convince him through beatings and other methods to denounce Judaism.

Chastising someone for his misdeeds is a mitzvah. However, there are guidelines on how to do it. If you do it the wrong way you may be considered a sinner. The Chofetz Chaim’s actions can serve as a guide for us. He found something to commend the man about. He did not criticize him. Instead, he said that the soldier would benefit even more if he could act a little differently. Then Chofetz Chaim spoke to him from a source of sincere love. His goal was not to criticize but to inspire and instruct. Harav Henach Leibowitz zt”l points out based on the Sefer HaYashar written by the Rabbeinu Tam, as well as from the Sforno (16:24) that you must purify yourself first before purifying others. In order to succeed in your reproof, you must be sincere. If you are remiss in the same area that you are criticizing in others, you will not be successful. There will be a lack of sincerity in your heart that the other person will sense. In addition, in order to succeed, you must feel true love for a fellow Jew. You must also sincerely feel that the sinner is hurting himself by not performing the mitzvos. If your speech is motivated from the heart it can be successful!

Compliment before criticizing! If you are sincere and your words come from a source of love, your efforts will be more likely to succeed.