The Power of Truth! Hee Haw! 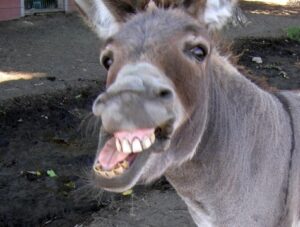 “Am I not your she-donkey that you have ridden all your life until this day? Have I been accustomed to do such a thing to you?” He said, “No.” (Bamidbar 22:30)

Bilaam, the prophet of the non-Jews was so excited. He hated the Jews. Even as an adviser to Pharaoh in Egypt, Bilaam was the one who had suggested that Pharaoh persecute the Jews. Now Bilaam was on the way to curse the Jews. Balak, the king of Moav, had promised Bilaam much honor and much riches in exchange for doing so. Bilaam was so eager to receive all that honor and all those riches. He loved both very much.

Bilaam saddled his faithful donkey to ride to Moav. On the way, Bilaam’s donkey exhibited unusual behavior. First it left the road and walked on the field. Bilaam hit the donkey to guide it back on to the road. Sometime later it, approached a vineyard with a narrow space between two fences. It squeezed itself to one side, pushing Bilaam’s foot against the wall and injuring it. Bilaam again hit the donkey. Later, they reached a narrow trail. Bilaam’s donkey crouched down and refused to move. Bilaam got very angry at his donkey and hit it again. Hashem performed a miracle and Bilaam’s donkey started talking to him. “What have I done to you that you struck me these three times?” Bilaam replied, “Because you mocked me! If only I had a sword in my hand, I would have killed you now.” The donkey responded, “Am I not your she-donkey that you have ridden all your life until this day? Have I been accustomed to do such a thing to you?” To that Bilaam had to respond, “No.” At that point, Hashem opened Bilaam’s eyes to see why his donkey had stopped. An angel was standing there with a sword in his hand. It was an angel of mercy to try to save Bilaam from sinning in his attempt to curse the Jews. The donkey had a good argument. Bilaam, the wise man and prophet, representing the other nations of the world, was silenced by his donkey. His donkey was correct, and he was wrong to have hit it.

The Sforno elaborates on this. The donkey told Bilaam that if it kept stopping, it must have been for a good reason. The donkey had served Bilaam faithfully for many years without disobeying. Suddenly, now it disobeyed. That fact should have been obvious to such a wise person as Bilaam. Bilaam should have realized logically that the problem was not his donkey. Rather, the problem was that Hashem was unhappy about the mission that Bilaam was on.

Why didn’t Bilaam realize the obvious? The Sforno explains that Bilaam was blinded by his strong desire for money and honor (22:32). That desire blinded him from seeing what was obvious. The result was that Bilaam was totally embarrassed in front of Balak’s messengers who saw his ineptitude. They thought it was humorous that a man who was going to curse an entire nation couldn’t control his donkey without hitting it. Furthermore, the donkey debated Bilaam and won!

What made Bilaam realize his error? When his donkey stated the obvious truth, it jolted Bilaam and caused him to admit that he was wrong.

The Midrash Rabbah (Braishis 93:10) quotes the sage Abba Kohen Bardela’s reaction to Bilaam’s inability to answer his donkey’s criticism. “Woe unto us on the day of [final] judgement. Woe unto us on the day of rebuke!” The shame that Bilaam felt upon hearing the truth is the same shame all of us will feel on the day that Hashem judges us. When Hashem shows us the truth we will be overwhelmed with embarrassment. When Hashem shows us that we actually had the ability to do something good or that we truly had the strength to overcome our desires, we will be stunned into silence.

We see that the desire for wealth and riches can blind a person from seeing what is obvious.
We also see the power of truth to wake up a person to his mistakes. It can also help redirect his course in life!