The Light of Love! 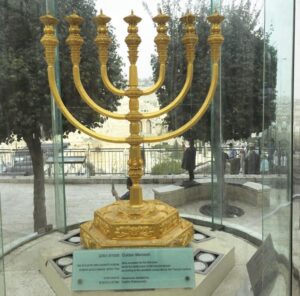 Hashem gave Moshe instructions on how to light the Menorah in the Mishkan. The Midrash Raba (15:5) says that the Jews asked Hashem, “’You asked us to light [the Menorah] before you. [But] You are the Light of the World!’” Why would Hashem need our light if He is the source of all light?! Hashem answered that of course He does not need our light. Hashem wanted us to provide a light for Him just as He provided light for us. What does that mean? The Midrash explains that Hashem wanted us to light the Menorah for two reasons. Hashem wanted to elevate our position amongst the nations. Hashem wanted them to view us with the utmost respect “They should say, ‘Look how the Jewish nation lights for the One who lights up the whole world.’”  Secondly, Hashem wanted to give us an opportunity to repay Him now for lighting our way in the desert, in order that we not feel the pressure of having a burdensome debt of gratitude to repay Him at a later point in time.

The trait of hakaras hatov, showing gratitude and appreciation for kindness and favors, is a very praiseworthy trait and one of the noble characteristics of a Jew. There are many instances where the Torah teaches us the importance of appreciating everything that Hashem or people do for us.

King David rose at midnight every night and thanked Hashem for His kindness to King David’s great grandmother, Rus. During the harvest, Boaz had slept near his fields to protect them from robbers. Boaz awoke in the middle of one night and found a woman, Rus, in his tent.  He could have easily become angry and cursed her. How dare she come to him in the idle of the night? Had Rus been cursed, King David would not have been born. Instead, Hashem caused Rus to find favor in the eyes of Boaz. Boaz blessed her noble intentions and agreed to perform the mitzvah of yibum, of marrying her, if a closer relative would refuse. They did marry and King David was their great grandchild. Every night King David thanked Hashem for this kindness done many, many years ago.

If so, why would Hashem give us the mitzvah of lighting the Menorah so that we no longer would feel indebted to Him? Why would Hashem want us to feel as if we are already repaid the favor and that we didn’t owe Hashem a further feeling of gratitude?

Furthermore, was this act needed to elevate us in the eyes of the other nations? Didn’t they already know that Hashem loved us dearly? Hashem had performed so many miracles for us, taking us out of Egypt and throughout our sojourn in the desert (see Rashi Bamidbar 14:13,14)?

The Maharzu on this Midrash explains. Indeed, we were already elevated in the eyes of the other nations. When the Midrash says “to elevate us before the other nations” it means to elevate ourselves. Hashem asked us to light the Menorah in the Mishkan as an expression of His love for us.

Hashem wanted to make us feel special and beloved to Him. Why would we need it? There was a possibility that the average Jew would not have fully appreciated why Hashem had lit the way for us in the desert. The average Jew may have felt that Hashem did it because of His mercy and not because of His love. [It is interesting to note that people could possibly have felt this way after all the miracles that Hashem had done for us. A discussion of this is not in the scope of the current dvar Torah]. After all, Hashem is merciful to all His creations. Maybe that is why He had lit the way for us. Hashem would have done the same thing for any other nation. To counter that feeling, Hashem instructed us to light the Menorah in the Mishkan for “Him”. That expression of love made it clear that when Hashem provided light for us in the desert it was because of His great love for us and not solely because Hashem is merciful to all.

Hashem does so much for us because His love for us is boundless. It is a pleasure to show our gratitude to Hashem in any way that we can. That shows that we reciprocate the endless love.