A Shmittah a Day Keeps the Locusts Away! 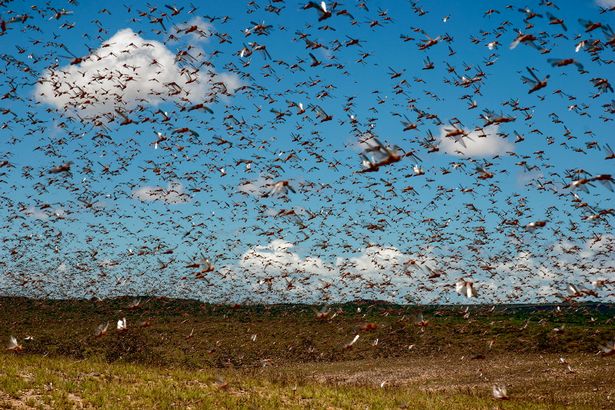 “Speak to the Jewish people… when you come into the land that I give you, the land shall observe a Shabbos rest for Hashem” (Vayikrah 25:2)

How will I earn a living? Where will I get food from? How will I manage? These are all valid questions that could be asked by a farmer in the land of Israel, prior to the shmittah year (Every 7th year is shmittah. There is a mitzvah not to work the land in Israel). To answer all those questions, the Torah promises that the farmer will have an abundance of food in the 6th year – enough to sustain him & his family for the 6th, 7th & 8th years (until the new crop is harvested). What a special blessing!

Two famous shmittah miracles occurred in the religious settlement of Moshav Komemiyut, a settlement that kept the laws of shmittah. At the close of the shmittah year in 1952, they were left without any wheat to plant. With great difficulty they bought leftover wheat that was in terrible condition, cracked, and full of worms. People from nearby farms, who had not kept the laws of shmittah, laughed at them. A miracle occurred, and it rained at the best time for the crops of Moshav Komemiyut. They actually harvested a bumper crop and were the only settlement in the area that had any yield on the crops.

During the Shmittah year of 1958-1959, a swarm of locust struck the neighboring settlements, destroying most of their crops. The entire swarm then headed towards Komemiyut. As soon as the swarm reached its borders, it turned away and flew away as quickly as it had arrived. Another miracle had occurred for those who kept the mitzvah of shmittah!

What message can we learn from the challenging mitzvah of shmittah?

The pasuk says “Shabbos laShem”. Why is shmittah referred to as Shabbos? Rav Ovadia Mibartunura’s explanation of Rashi is that shmittah, like Shabbos, testifies to the fact that Hashem created the world in six days and rested on the seventh. When you abstain from work on Shabbos, you show your belief that Hashem created and continues to oversee the world, determining what you will earn. You show that same belief when you don’t work your land during the entire 7th year.

In a similar vein, the Alshich explains, shmittah shows that your successes are not the result of your hard work. Your bumper crop wasn’t due to your 12-hour days of plowing, planting, weeding, watering, etc…. Rather, your success is solely due to the graciousness of Hashem.

During the time of the prophet Yirmiyahu the Jews spent too much time working their fields at the expense of Torah learning. Yirmiyahu showed them the jar of manna that had been saved in the Bais HaMikdash. His message to them and to us as well, was that Hashem will provide for your needs, just as He provided in the dessert, through the manna.

Even though you are putting in effort to earn a living, remember that the actual income comes from Hashem. Hashem wants you to remember to do what is of primary importance – to learn Torah!