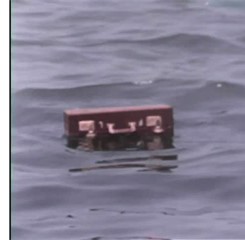 “Then Moshe and Bnei Yisroel chose to sing this song to Hashem… “ (Shmos 15:1)

Prior to World War ll, a group of German Jews were lucky to escape from Germany to England. However, in 1940, the British were afraid that German foreigners were spies who would join with the enemy when the Nazis invaded their country. As a result, the British government rounded up all the Germans and sent them out of England. Those Germans of military age, from 18 to 65, were sent by boat to a prison in Australia, which was then a British colony. The British filled a troopship, the HMS Dunera, with over 2,500 refugees, most of whom were Jewish.

There was a fear of the Nazi submarines that patrolled the waters. All identifying marks were removed from the ship. In addition, the captain and crew were instructed not to respond to any radio requests to identify themselves. On board the ship, the Jews were all very badly treated by their British guards. The guards also looted any valuables that they could find. When they finished searching the personal luggage of the Jewish prisoners, they threw much of it overboard. Imagine how the Jews must have felt. They thought that after escaping Nazi Germany that they would be safe in England. Now they were being sent to prison and all their valuables were stolen from them. In addition, their suitcases were dumped overboard. Any extra clothes and personal mementos from home, went to the bottom of the ocean.

Life in Australia was very difficult. Eventually the prisoners were freed. Many stayed in Australia and made a life for themselves. The refugees retained unpleasant memories of their voyage. Over 40 years later a diving-team off the coast of Europe found a German submarine that had been sunk. They recovered the captain’s diary. One entry was especially interesting. The captain wrote that they were trailing an English troopship that did not have any identifying markings on it. The Germans prepared their torpedoes to sink the ship. As they were doing so, they noticed suitcases and papers floating on the surface. They sent a diver to retrieve some of the items. When they found German writing on them, they determined that this was not a troop transport carrying British soldiers. Instead, it must have been transporting German prisoners of war. The order was given NOT to torpedo the ship in order that they not harm their German brethren.

Only now, 40 years after the fact, did the refugees understand why Hashem had orchestrated that all their belongings be thrown in the ocean. That saved their lives! (Rabbi Frand on the Parashah 2 and Stephen G. Rosenberg in the Jerusalem Post online, December 12,2015).

At Hashem’s directive, Moshe went to Pharaoh, telling him to allow the Jews to go to the desert to serve Hashem. Pharaoh refused the request and even made the work harder for the Jewish People. He said that from this point on, the Jews would have to find their own straw to make bricks. Furthermore, they had to make the same number of bricks as they used to, when the straw had been provided to them. The Jewish foremen complained to Moshe and Aharon about their worsening plight. Moshe felt very badly that his actions caused more harm to the Jews, just the opposite of what he had intended. Moshe complained to Hashem, “Hashem, why have you done evil to this people…. “u’may’az basi”, ‘From the time’ I came to Pharaoh… he did evil to this people….” (Shmos 5:22-23)

After the plagues were brought upon the Egyptians, the Jews were freed from Egypt. They miraculously crossed the Red Sea and saw the Egyptian army drown. At that point, the Jews sang a song of praise to Hashem. The first word of the song that Moshe started was “az”, “then”. The Midrash (Shmos 23:3) says that the word Moshe used was significant. Moshe told Hashem, “I know that I sinned before You with the word “az”... .Therefore I am now praising You with the same word.”

When Moshe first approached Pharaoh he complained to Hashem that his visit had made matters worse for the Jews. After the Jews safely crossed the Red Sea, Moshe understood that his visit had actually helped bring salvation to the Jews. The Jews were supposed to be in Egypt for 400 years. Hashem was concerned lest they would never be able to make it out of Egypt. They had fallen to the 49th level of impurity, while in Egypt. Had they fallen one more level, they would have been so low that they would have never left Egypt. To resolve that problem, Hashem caused Pharaoh to increase the workload so that 400 years of had work be crammed into 210 years. Now, at the Red Sea, Moshe understood that the increased suffering to the Jews because of Moshe’s intervention, actually benefitted them and aided in their eventual freedom from Egypt. (based on Rabbi Frand on the Parasha 2)

We all have various difficulties in life. Our suffering may actually be the means to our ultimate salvation!