There is a Sheep in My Bed! 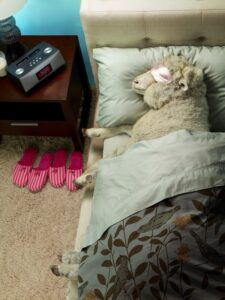 “You shall keep watch over it [the sheep] until the fourteenth day of this month; and all the assembled congregation of the Jews shall slaughter it at twilight” (Shmos 12:6).

Yaakov visited a spice shop and remained there for a few hours. When he left, his clothes retained the aromatic smell of the spices.

Yosef’s jacket was left in a room that was destroyed by fire. Although his jacket wasn’t burned, the smell of smoke was so intense that it lasted for weeks.

A family arrived in New York from the Soviet Union. JEP offered to enroll the children in yeshiva. The parents were disinclined. They felt that their children would learn English better in a public school, ESL setting. Meanwhile, JEP enrolled the children in a Jewish summer camp. The children had a very positive experience in the atmosphere of the Jewish camp. They felt welcomed by the religious children and comfortable in the Jewish surroundings. To their parent’s delight, they learned English by spending time in the English-speaking environment. As a result, the parents were excited to enroll their children into yeshiva. That decision started a chain-reaction. When this family’s relatives emigrated from the Soviet Union, they allowed JEP to place their children in a yeshiva. This story took place about 25 years ago. The children are married and have religious homes. They send their own children to yeshivos.

Hashem instructed Moshe to tell Bnei Yisroel to slaughter an animal as a Pesach offering. Hashem gave Moshe a long list of instructions of what to do and how to do it. Rabbi Levi ben Gershon, the Ralbag, (Shmos 12:1), explains that there was a significance to all these instructions. The Jewish People had been influenced by their environment, being amongst the Egyptians. The Jews were steeped in idol worship. Therefore, they had to perform many actions to remove their belief in idols and in the power of idols. Hashem told them to take a sheep to sacrifice, to agitate the Egyptians who considered a sheep as a god. Other actions that they were instructed to do to the sheep showed the Jews that it had no real power as an idol. They took a male sheep which was considered a choice animal. It was slaughtered publicly, in front of all the Jews. It was slaughtered in the middle of the day when the zodiac of the sheep was at its “full power”. It was publicly roasted, whole. Its blood was placed on the doorposts. It was eaten by groups of Jews. The sheep-god was thought to punish by fire. Therefore, it was roasted by fire, to show that it was powerless to respond. Each sheep had to be taken by a Jew and tied to his bed for four days before slaughtering it. This caused the Jewish People to contemplate and realize that the sheep, the Egyptian god, was totally powerless.

The Jews had been profoundly affected by their environment. The alleged power of idols had seeped into their systems. Every single action that Hashem required them to do with the sheep, was needed to remove this deep-rooted influence. Had they left out any one of these actions, they would have been left with a trace of belief in this false idol.

We see how much a person can be influenced by one’s environment.

Every small, positive action that one does, can remove a portion of that negative influence.