Do Not Stop Until the Car Runs Out of Gas! 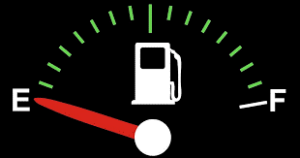 “I am a stranger and a resident among you; grant me an estate for a burial site with you….” (Bereishis 23:4)

Marc and Steve both dreamed of representing the United States in the upcoming Olympic Games. Running came naturally to them. They were always the fastest runners in their respective classes. To their great joy, they were both chosen to be on the USA Olympic Team. The Track & Field coach kept pushing Marc to his limits. He found the training very difficult. Often, he was so exhausted after training that he went straight to bed. Steve was a natural athlete. He was not interested in being pushed by the coach. He preferred to train at a more moderate pace. He had enough energy in the evenings to enjoy mingling with the other athletes. At the big race, both Marc and Steve quickly raced ahead of the other runners. Midway through the race, some of the other runners caught up to Steve. Marc remained in the lead, while Steve slipped to fourth place. Marc won the gold medal while Steve came in seventh place. Marc was exhilarated; it was a dream come true. All the hard work that he had put in, all his days of exhaustion were worth it! Steve was very disappointed. He realized that he would have been in better shape had he trained to the limit. Now, it was too late.

Rabbi David Ashear tells a story of a talmid chocham who had been writing chidushei Torah- novel interpretations of the Torah, for the past ten years. He was getting older and decided he had done enough. He stopped writing his chidushei Torah. Very soon after, this man started becoming blind. When he went to the doctor, the doctor was shocked.  The doctor said that the talmid chacham should have turned blind ten years earlier. Apparently, this man’s extra involvement in Torah gave him an extra merit for protection, enabling him to see even though medically he should not have been able to. Once he decided to stop, he lost that extra protection.

Hashem constantly challenges us with tests. Every test is an opportunity for spiritual growth. Each test that we pass raises us to a higher level of spirituality and holiness. It also brings us to an even greater closeness to Hashem. When we pass one test, and Hashem feels that we are ready, then He presents us with an even harder test than before. Since now we are on a higher spiritual level than we were previously, Hashem gives us the “opportunity” of this harder test to enable us to grow even closer to Him.

Our forefather, Avraham, passed the 10 extremely difficult tests that Hashem gave him. Rashi in Pirkei Avos (5:3) says that those ten tests corresponded to the 10 utterances with which Hashem had created the World. Rashi says that the world exists in the merit of Avraham passing his 10 tests.

Rashi and the Rambam both say the Avraham’s tenth and final test was Akeidas Yitzchak. There were many aspects of this test that various commentaries focus on. Avraham was willing to sacrifice Yitzchak, his beloved son of his old age. Furthermore, Akeidas Yitzchak seemed to be in contradiction to Avraham’s preaching throughout his entire life. He had constantly preached against idol worship and human sacrifice. He had always spoken about Hashem as a loving G-D. Avraham had also hoped that Yitzchak would continue his life’s work of introducing the concept of Hashem, to the world. Lastly, this action was contradictory to Hashem’s promise to Avraham. Hashem had promised Avraham that his lineage would continue through Yitzchak. If he would sacrifice Yitzchak’s life, what would happen to Hashem’s promise? Despite all this, Avraham was willing to do whatever Hashem asked, without questioning Him.

Rabbeinu Yona (Pirkei Avos 5:3) lists the Akeida as only the 9th test! The 10th test was when Avraham wanted to find a burial plot for Sarah. Hashem had promised Avraham that He would give him all the land that he had traversed. Yet, Avraham had difficulty finding a plot. Eventually he was able to buy one for an exorbitant sum. Despite the difficulty, Avraham did not harbor any negative feelings to Hashem. He never questioned Hashem’s actions.  Hashem tested Avraham and revealed to the world that Avraham feared Hashem and was perfect in all his middos.

Rabbi Yissachar Frand (in Rabbi Frand on the Parsha) says that is generally accepted that each of Avraham’s tests was harder than the previous one. If so, how could this last test possibly be harder than the test of Akeidas Yitzchak? How could it even come close? Rabbi Frand explains that Avraham must have used every ounce of strength and faith to withstand such a difficult test as the Akeidas Yitzchak.

I recall learning that during the Akeida, Avraham did not suppress his love for Yitzchak. At the same time that Avraham showed fortitude in following Hashem’s will, simultaneously he was crying, as a loving parent.  Avraham must have been emotionally drained afterwards. When he returned home, he found out that Sarah had died, and then he had to haggle with Efron to negotiate a burial place.

Avraham had just passed the ultimate test, the Akeida, proving to the world that he truly feared Hashem. His merit was so great that it was able to sustain the Jewish people throughout our history. Rabbi Frand says that Avraham could have justifiably complained to Hashem. “Enough already. My life was dedicated to You, Hashem. I passed all Your tests. Did I have to go through this as well? Can’t things finally go smoothly for me?” Avraham could have easily reacted instinctively, as many people would.

Avraham passed even this subtle test, modelling for us that one must constantly strive for spiritual growth. We should not rely on past accomplishments. We never remain in one spot; we are either increasing our level of spirituality or decreasing. We can and must keep growing in spirituality.