One Marshmallow or Two? 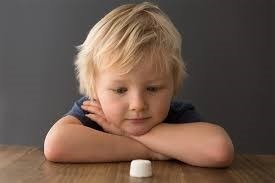 “Therefore, those who speak in parables shall say,”Come to Cheshbon.” (Bamidbar 21:27)

In the 1960s, Walter Mischel, a professor at a Stanford University conducted an important psychological study. He tested hundreds of children, most of them between the ages of 4 and 5 years old.  It was dubbed “The Marshmallow Experiment”. Each child was brought into a private room and placed on a chair. A marshmallow was placed on the table in front of him. The researcher told the child that he was going to leave the room. If the child would not eat the marshmallow, then the child would be rewarded with a second marshmallow. However, if the child decided to eat the first one before the researcher came back, then he would not get a second marshmallow. In the study, many children eventually gave in to temptation. A few of the children were able to wait the entire time. The researchers conducted follow up studies and tracked each child’s progress. The children who were willing to delay gratification and waited to receive the second marshmallow ended up having higher SAT scores, lower levels of substance abuse, lower likelihood of obesity, better responses to stress, better social skills as reported by their parents, and generally better scores in a range of other life measures. The researchers followed each child for more than 40 years and again, the group who waited patiently for the second marshmallow succeeded in each capacity that they measured. This proved that the ability to delay gratification was critical for success in life. (Behavioral Psychology Willpower by James Clear)

The Torah says, “Therefore, those who speak in parables shall say,”Come to Cheshbon” (Bamidbar 21:27). The Talmud (Bava Basra 78B) interprets the verses homiletically. “Hamoshlim” those who speak in parables, those people who rule over their evil inclination will say, “Come to Cheshbon”. Come and let us calculate the account [cḥeshbono] of the world. Let us look at the financial loss incurred by the fulfillment of a mitzvah in contrast to its reward. Let us also look at the reward for committing a transgression, i.e., the pleasure and gain received, in contrast to the loss that it entails.

The same idea is quoted in Pirkei Avos (2:1). Rabbi Yehudah Hanasi says, “…Calculate the cost of a mitzvah against its reward, and the reward of a sin against its cost.” Rabbeinu Yona and Rashi both explain that if you chose to do a mitzvah and incurred a financial loss because of that, do not be upset. Your reward in Olam Haba will be thousands of times greater than your loss was. The reverse is also true. Rabbi Yehudah HaNasi continues, “Consider the reward of a sin against its cost.”  Rashi explains “the reward of a sin” refers to the enjoyment that you may receive by sinning. Consider the pleasure that you receive which will cost you dearly in Olam Haba. Is it worth it? The Rabbeinu Yona says, if you feel that by sinning you will receive a large financial gain or much pleasure, stop and think. The punishment that you will receive will be greater than your gain. Is the result worth the temporary and fleeting pleasure that you would have?

The Talmud tells us (Succah 52A) that Rabbi Yehuda teaches that in the time of Mashiach, Hashem will slaughter the yetzer hara, the evil inclination in the presence of the righteous and in the presence of the wicked. To the righteous the evil inclination will appear insurmountable, as a high mountain. To the wicked it will appear as a mere strand of hair. “The righteous will cry and say, ‘How were we able to overcome so high a mountain?’ The wicked will cry and say, ’How were we unable to overcome this strand of hair?’”

The Bais HaLevi (as quoted in The Pirkei Avos Treasury by Rabbi Moshe Lieber) says that the Talmud teaches us the psychology of sin. “The allure of sin lies in the promise of thrill. Before one tastes evil, it seems to be enjoyable and exciting. Once experienced, it loses its glamour.”  The righteous did not experience sin. Thus, the allure was great. The righteous will be surprised at how they were able to overcome such a strong temptation. The wicked already tasted sin. After the momentary pleasure that they felt, they felt its emptiness and hollowness. It was no longer a big deal and no longer tempting. At that moment, it would not be difficult for them to say no, to their yetzer hara. “It was unfulfilling and as conquerable as a strand of hair.”

We are all accountants by profession. We must constantly calculate our actions. Will they increase the debit side of the ledger or the credit side? Is a moment of pleasure worth the consequences? Is a loss incurred, to perform a mitzvah, worth a reward, thousands greater than our loss?

We must make these decisions constantly, every moment of the day and every day of our lives. May Hashem give us the strength to make the correct decisions!