What Can You and I Do to Bring the Ultimate Redemption? 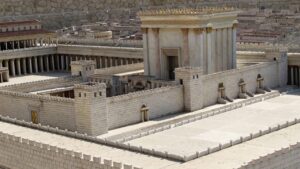 “These are the words that Moses addressed to all Israel…” (Devorim 1:1)

Tisha Ba’Av (the 9th day of the Hebrew month of Av) is the saddest day in Jewish history.  Many tragedies occurred including the destruction of both Batei Mikdash (the Holy Temples). When the Temple is rebuilt, may it occur speedily in our days, many of our personal and collective challenges and difficulties will vanish. The second Bais HaMikdash was destroyed because there was too much baseless hatred. We didn’t feel enough love for one another.

We can’t force change on others. We can’t force others to act or react in a certain way. However, we can change ourselves! We can change how we act and react in various situations. We can hasten the rebuilding of the Bais HaMikdash by improving ourselves.

Before Moshe Rabbeinu died, he rebuked the Jewish People for their past sins from the time of their exodus from Egypt. Amazingly, Moshe did not spell out their sins explicitly. He just alluded to them. Why? Rashi (Devorim 1:1) says that Moshe wanted to show respect for them. He did not want to offend or embarrass them. HaRav Chaim Shmulevitz, the late Rosh Yeshiva of Mir, notes (Sichas HaMussar page 133), that we learn from Moshe’s actions how careful we must be to show proper respect to all people and not to embarrass anyone. Even evil people should not be embarrassed without a good reason. Even someone like Bilaam, who went to curse the Jewish People did not deserve to be embarrassed. Even though he was severely punished, Hashem killed his donkey to prevent his being embarrassed by it.

Harav Yitzchok Zev Soloveitchik, the late Rav and Rosh Yeshiva in Brisk had a problem to resolve. As a result of World War I, there arose a serious problem regarding the local shochtim, those who ritually slaughtered the animals. A meeting was called in the Rav’s home to plan how to re-establish proper standards. Before the meeting started, a few people noticed that one of the shochtim had come to the meeting, uninvited. Clearly, his presence would interfere with the meeting. Although he was politely asked to leave, he refused. He said that he was in the Rav’s house and would only leave if the Rav himself would tell him to leave. The people turned to Rabbi Soloveitchik, imploring him to demand that the fellow leave his home.  The Rav did nothing.  He sat quietly, not even hinting to the fellow to leave. Finally, someone tricked him to leave. The people turned to the Rav for an explanation for his silence. He explained to them how serious it is to embarrass a fellow Jew. Hashem even “helped” bar Kamtza and allowed the Beis HaMikdash to be destroyed because of the public embarrassment that bar Kamtza had to endure.  Rabbi Soloveitchik continued, that if they would have embarrassed this shochet their entire plan to strengthen the standards of shechita. would have failed. (Yalkut Lekech Tov on the Parsha)

We must treat everyone with respect and be careful not to embarrass anyone.

There was a man who provided food for his children. Every day he gave a portion of food to each child. One day, one of his children approached him. He told his father that another child grabbed his portion. “My father, I asked my brother to return my portion, but he refused. I know that you don’t want me to hit my brother or fight with him. Please give me another portion”.  The father was so happy with his son’s good behavior. He kissed him and gave him another portion that was even larger than his original one. He told his son that the brother who stole his portion will not benefit because he won’t be given a portion the following day.

What if the son would have responded differently? What if he would have argued and fought with his brother? What if they had argued and had a physical fight in front of their father? Even though this son had been wronged, his father would have been upset at both sons.

This story is analogous to our relationship with Hashem, our loving Father. Hashem provides food for all of us. Hashem wants us to be at peace and not argue with each other. Hashem wants us to love our fellow Jew, treat him with respect and not steal from him. Like the example with the two sons, what if one person harms another person’s business (inappropriately) and ignores a request to stop? What if the person whose business has been harmed does not start a fight with the one who wronged him and remains quiet? What if, instead, he davens to Hashem to “give him another portion”? Then Hashem will be happy with him and will certainly give him another and even better portion.

We can fortify our belief that Hashem provides us with our needs.  One way of doing so is to keep a journal of all the kindnesses that Hashem does for us. Then if another person wrongs us, we can find the inner strength not to respond by insulting, slandering, or fighting. We can feel confident that Hashem will take care of us and provide for us.  [Of course, when necessary, if someone stole from us, etc…, we may address the matter in a Beis Din, a Jewish court of law].

Rabbi Dovid Ashear tells the story of a Rabbi who was very upset because he had been publicly humiliated. When he discussed it with his mentor, he was told something unexpected. His mentor said that he should dance and be happy that he was given the opportunity to be embarrassed. The embarrassment was a gift from Hashem to wipe out many of his sins.

The Chofetz Chaim (Shaar Hatvuna Chapter 8) shares a famous story when King David was running away and was cursed by Shimi ben Geira. David’s soldiers wanted to kill Shimi for this act of disrespect. David remained silent and did not respond to the curses. He did not even allow his soldiers to punish Shimi. David said that the curses were from Hashem. In other words, Hashem wanted someone to curse him. The purpose was to atone for his sins. David accepted Hashem’s decree with love. Since he remained silent and accepted that it was a decree from Hashem, David merited a tremendous spiritual reward. The Talmud (Rosh Hashana 17a) quotes a story of a Rabbi who remained silent in the face of being disgraced. This Rabbi had been near death. His silence merited him extra years of life.

Although it is difficult, we CAN remain silent when someone disgraces or embarrasses us. Our silence helps maintain peace and is ultimately very beneficial to us. We must realize that the one who disgraced us is only a messenger from Hashem. Hashem has a good reason for causing it to happen.

These are lofty goals to attain. However, if we work hard, we can succeed, at least some of the times. We can show respect to everyone, even people who are not so nice to us. We can avoid embarrassing others. We can choose not to respond to insults. We can choose not to slander or fight with others, even if we are “in the right”! Ultimately, our successes will benefit us and the entire Jewish People.