You Lose Some, You Win All! 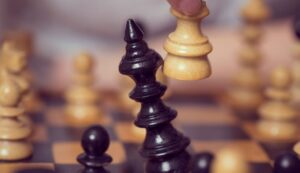 Yitzchak was a shochet in a small town in Europe in the 1800’s. Once he questioned if the cow that he had slaughtered was kosher or treif. He asked the Rav of the town who told him that it was treif. Even though it was a large financial loss, Yitzchak accepted the ruling calmly. Sometime later, Yitzchak had a financial dispute with Yosef, another resident of the town. The dispute did not involve a large sum of money, but they did not resolve the dispute on their own. They went to the Rav who convened a bais din (a Jewish court of law). After they ruled against Yitzchak, he became furious, lost control, and screamed at the Rav. Even though the sum of money in question was relatively small, the idea of losing to someone else was too much for Yitzchak to bear.

When the Jews camped in the desert, after leaving Egypt, they were told to pitch their tents together with members of their own tribe. Shlomis was the only Jewish woman who had been violated by an Egyptian man. A dispute arose when her son wanted to pitch his tent with the tribe of Dan, the tribe of his mother. Another member of the tribe of Dan said that he was not permitted to camp there because his father was not from Dan. Instead of trying to work things out, the Jew from the tribe of Dan was quick to say that they had to go to Beis Din to settle the dispute. Beis Din ruled against Shlomis’ son. He responded by cursing, using Hashem’s holy name (for which he was punished).

The Da’as Zekanim (Shmos 24:11) brings a story from the Talmud (Pesachim 4A) about a person who, whenever he disagreed with someone, immediately suggested that he and his adversary bring the matter to court.  Rashi explains that for any monetary disagreement this person had, he would immediately say, “Let’s go to court”.

Eventually, people who knew him concluded that he must have descended from the tribe of Dan.  Our forefather Yaakov blessed the tribe of Dan, “Dan will judge his people …” (Braishis 49:16). The tribe of Dan had the tendency to take all their arguments to court and not listen to their peers.

Rav Henach Leibowitz zt”l says that this trait of Dan was a positive one.  Yaakov gave this blessing, having Shimshon (Samson) in mind. Shimshon came from the tribe of Dan. Yaakov’s blessing was that Shimshon would have strong convictions, uphold the truth, and be able to fight to the very end.  However, as with any trait, it can be used in a good way or in a bad way. One would think that it is good to have a desire for justice and to constantly want to go to Bais Din to follow their judgements. In reality, rushing to do this all the time is bad. Instead, a person should first try to settle his differences out of court. He should try to avoid arguments by respecting an opposing opinion and trying to work-out a compromise.

In this week’s parsha, Moshe repeated the guidelines used for instituting their judicial system. Moshe had changed the system at the suggestion of his father-in-law, Yisro. The Netziv, Rabbi Naftali Tzvi Yehudah Berlin zt”l quotes the Talmud (Sanhedrin 6B) that Moshe ruled court cases with strict justice, according to the law. As soon as Moshe heard both sides of the argument, he knew immediately who was in the right, and ruled accordingly. Yisro had suggested establishing a comprehensive court system, with many judges. The judges would often need time to analyze both sides before rendering their decision. That would allow time for compromise, to end the dispute. Yisro’s main intention was to establish a justice system based on the idea of compromise, enabling it to become a judgement of peace (See the commentary Harchev Davar on the pasuk, Shmos 18:23). Without compromise, the one who loses will often feel embittered towards the winner and towards the judges. Yisro’s system promoted peace since no one loses. Each side would feel that although he did not win, he also did not lose.

Rav Avrohom Pam zt”l (quoted in Rav Pam on Chumash by Rabbi Sholom Smith) quotes the Shulchan Aruch (Choshen Mishpat 12:2) that the Beis Din should always try to settle a case by negotiating a compromise. The Sma says that “The pursuit of peace is so important that it justifies a monetary concession”. The Shulchan Aruch prohibits a person to bypass the Jewish Beis Din in favor of a secular court, unless authorized by the Beis Din. Rav Pam zt”l  quotes Rabbi Akiva Eiger zt”l who rules that it is considered stolen property if a person is awarded money by a secular court which would not have been awarded him by the Beis Din. In fact, if one uses that money to betroth a woman, the marriage would be considered invalid!

The Bais Hamikdash was destroyed because of baseless hatred. Anything that we can do to minimize ill-feelings can make us feel happier and can also be the catalyst for the rebuilding of the Bais HaMikdash. When we have disagreements with others, be it friends, spouses, or business associates, we should try to compromise. By not “winning” the argument, we will be the true winners!