I Got This! Don’t Worry! 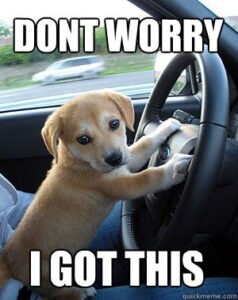 “Perhaps you will say in your heart, “These nations are more numerous than I; How will I be able to drive them out? Do not fear them! You shall remember What Hashem your G-D did to Pharaoh and to all Egypt.” (7:17-18)

When we listen to the news, we hear a very bleak picture:

The news sounds very terrifying. How can we, as Jews, survive when so many nations and so many individuals want to rid the world of us?

The answer lies in the psukim in this week’s parsha. The Jewish People were on their way to conquer Eretz Yisroel. The nations of the Land were numerous and were more powerful than the Jewish People. There were giants to defeat! “Perhaps you will say in your heart, ‘These nations are more numerous than I; How will I be able to drive them out?’” Moshe responded to that fear by saying, “Do not fear them! You shall remember What Hashem your G-D did to Pharaoh and to all Egypt.”

Their fear was based on the honest and logical conclusion that there was no natural means of defeating their enemies. Moshe said, that they were correct! There was no natural means of defeating them! However, that’s not a problem! Remember how Hashem took you out of Egypt. Hashem performed miracles, changing nature, to free you. Similarly, Hashem will perform miracles for you now. In fact, Moshe told them that Hashem would send a swarm of hornets to attack the enemy that had hidden from sight. According to Rabbi Shimon ben Lakish who is quoted in the Talmud (Sotah 36A), “The hornet stood on the banks of the Jordan and threw its venom at the inhabitants of the land, and it blinded their eyes from above…”. A further miracle to help the Jews!

The Jews are not bound by the natural course of events. Hashem has already shown that He will change nature to help us. We have nothing to fear!

Throughout our history, Hashem has performed miracles to save us. That thought should give us a sense of calm and confidence, even when surrounded by danger, on all sides.

We must always rely on Hashem. Whether our concern is

about the Jewish People as a whole or our own personal problems,

we should be confident that Hashem can help us.