Take the Elevator Up! 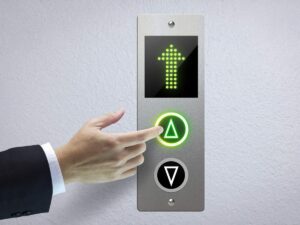 “[Hashem] Who feeds you manna in the wilderness … in order to afflict you and in order to test you, to do good for you in your end.”(Devarim 8:16)

In the 1960 Olympics, the U.S. hockey team won the gold medal. In the next four Olympics, the Soviets won the gold medal each time. During that time, their record was 27 wins, 1 loss and 1 tie. They outscored their opponents 175-44. In the 1980 Olympics, in Lake Placid New York, in one of the most dramatic upsets in Olympic history, the underdog U.S. hockey team, made up of only college players, defeated the Soviet team, made up of professional athletes. This event was known as “The Miracle on Ice”.

The 1980 U.S. hockey team was probably the best-conditioned U.S. Olympic hockey team of all time. This was the result of countless hours of skating exercises in preparation for Lake Placid. Their coach, Herb Brooks, had prepared them by working them excessively hard. In one game, months before the Olympics, the U.S. team played poorly. After the game, as the team was headed to the locker room, Herb sent the players back on the ice. He made them skate from one end of the ice to the other, again and again, until the players were ready to fall from exhaustion.

Due to the excessively hard work and affliction that they were put through, the U.S. hockey team eventually succeeded beyond anyone’s wildest expectations.

Herb Brooks used to say, “Let me start with issuing you a challenge: Be better than you are. Set a goal that seems unattainable, and when you reach that goal, set another one even higher.”

Herb Brooks “tested” his players by giving them what seemed to be insurmountable challenges. When they “passed” those challenges, they were given more “tests”, with more difficult challenges. They passed those as well.

What the U.S. hockey team went through, is the story of life. This week’s parsha tells us that Hashem provided the miraculous food, the manna, to afflict us and to test us. Hashem providing us free food in the dessert, was a blessing. Why is it considered an affliction and a test? Rashi (Shmos 4:16) says that the Jews were being tested to see if they would follow the laws that were given with the manna. Would they be careful not to leave over any manna for the next day? Would they refrain from gathering any on Shabbos? The Ohr HaChaim Hakadosh in this parsha, as well as the Sforno in Devarim (8:16) say that the test was to see if the Jews would follow Hashem’s will when they had so much free time since they did not have to spend time growing or preparing food. Would they use their leisure time to learn Torah and perform mitzvos? What was the affliction? The Sforno (Devarim 8:16) says that learning Torah and doing mitzvos, while having an empty cupboard and not knowing where your food will come from tomorrow, is very challenging. The pasuk concludes that this affliction and test were beneficial, “in order to do good for you in your end”.

The Chofetz Chaim zt”l , quoting the Zohar, says that the word nisayon, test, has a double meaning. When we pass the test that Hashem has given us, it also elevates us. Passing Hashem’s test helps us bring our inner abilities to fruition, thus elevating us to a higher level. Serving Hashem with afflictions raises us to greater heights. The Midrash Rabba (Braishis) says that Hashem first tests us before raising us to greatness. The Chofetz Chaim zt”l continues that any pain or affliction one undergoes for the sake of Hashem, elevates him in Olam Haba (the World to Come). Furthermore, when we serve Hashem in difficult times, our deeds are inscribed in Heaven, forever. It is considered as if we did chesed (kindness) with Hashem!

Hashem gives all of us challenges in life. Passing these challenges, elevates us. Serving Hashem in times of great challenges is memorialized forever in Heaven. Hashem considers it as if we are doing chesed for Him.