Thank You Hashem for Making Me Get Thirsty! 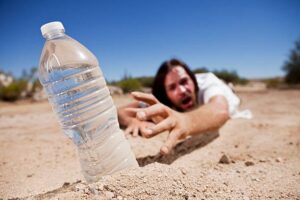 “Hear, O Israel! You are about to cross the Jordan to go in and dispossess nations greater and more populous than you: great cities with walls sky-high a people great and tall….” (Devorim 9:1-2)

Talya was distressed by her son’s exceptionally huge ears. Although she was not religious, she sent him to a religious school where the boys had long peyos. She wanted him to grow peyos to hide his ears. Talya’s need to cover her son’s ears led to his living a Torah-lifestyle and raising a family who serve Hashem. (Rabbi D.Ashear, Living Emunah for Children, vol. 2)

Moshe told the Jewish People that they were about to enter the Land of Israel. They would have to dispossess many powerful nations whose cities were protected by strong and immense walls. According to the laws of nature, this conquest was impossible!

Rabbi Moshe Sofer was the Chief Rabbi of Pressburg in the early 1800’s. He was known as the Chasam Sofer. He states that the Land of Israel was designated for the Jewish People from the very beginning of time since the Creation of the World. Other nations were permitted to live there temporarily until the Jews were ready to possess it.

If so, the Chasam Sofer questions why Hashem allowed these nations to build such fortified cities, that were impossible to conquer? Why did Hashem permit such strong and powerful nations to inhabit Eretz Yisroel rather than weak ones whom the Jews could have easily conquered?

The Chasam Sofer says that the answer to this question can be found in the Midrash Rabba on this pasuk. The Midrash says that before you drink water to quench your thirst, you say the blessing … Shehakol nihiye bidvaro; that everything should be according to the words of Hashem. Rabbi Tarfon says that before drinking you say the blessing … Borei nefashos rabbos vechesronan…; Blessed be You, Hashem, our G-D, King of the Universe, Who creates many living things with their deficiencies…. Hashem is exceptionally kind to His creations, enabling them to quench their thirst.

The Chasam Sofer says that the answer to both questions is inferred in the Midrash. Hashem created us as people who get thirsty to enable us to appreciate how much we need Hashem. Once we appreciate how much we need Hashem, we will come to appreciate all that Hashem does for us. Then we will thank Hashem and become closer to Him. This is the reason for our creation, to come close to Hashem through learning Torah and performing mitzvos. Thus, creating us with needs is actually a great kindness of Hashem.

This explains why entering Eretz Yisroel was such a formidable challenge. It was to help us realize that our success in conquering such powerful foes was only due to Hashem’s aid. It was to help us appreciate Hashem’s kindness. (based on the Chasam Sofer in his sefer Torah Moshe and elaborated on in Sefer Yalkut Lekech Tov).

Creating us with deficiencies and needs is one of Hashem’s greatest kindnesses to us!
It brings us closer to Hashem as we realize how much we need Hashem and how much Hashem does for us.