The Journey is Painful but the Destination Makes it Worthwhile! 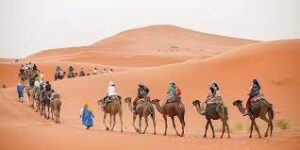 “The Rock, His actions are pure, for all his ways are just… He is righteous and straight.” (Devarim 32:4)

In 1979, the Shah of Iran was overthrown. The Ayatollah Khomeini was soon going to take over. There was a reign of terror against the Jews. One day, a gang of thugs entered a carpet store and killed the Jewish owner, claiming that he was an agent of the Shah. The man’s widow knew she and her children had to leave the country, as did many other Jews. They were not permitted to leave legally. She contacted a man who smuggled Jews out of Iran for a large sum of money. She had to leave most of her wealth behind and could not pack suitcases, lest that arouse suspicion. She couldn’t even tell her children in advance, lest they inadvertently let the news slip. She, her children, and a group of other Jews met the guide at the edge of Tehran, in the middle of the night. For the first few days, they rode on camels for 18 hours straight. The pain was excruciating but each time they complained, the guide told them to be quiet. If they wouldn’t, he would shoot them! By day, the sun scorched them and left their throats parched with thirst. By night they froze. As the mountains got steeper, they switched to riding donkeys. Often, the path was so narrow that one wrong move could cause them to fall to their instant death. There were many difficult obstacles along the way. Each time anyone hesitated, the guide threatened to shoot. This torturous journey lasted for two and a half weeks. When they finally reached the safety of the Turkish border, the guide suddenly embraced the children. With tears in his eyes, he apologized for being so tough. He said that had he not been, the group would not have reached safety alive. (It’s All a Gift by Miriam Adahan)

Our lives are a journey which is often treacherous and filled with pain. We can be sure that when we reach the next world, the World of Truth, we will see that Hashem, our Guide, always loved us. Then we will understand that all the difficulties we went through were necessary to reveal the G-Dliness in us and in others. (It’s All a Gift by Miriam Adahan)

Rav Levi Yitzchak of Berditchev once remarked, “If I were the Master of the world, I would not change anything. I have no doubt whatsoever that all Hashem does is for man’s benefit. It is our own shortcomings that make it so difficult for us to perceive the fairness of his ways.” (Talelei Oros by Rabbi Yissachar Dov Rubin)

The Torah says, “He [Hashem] awakens His nest like an eagle, hovering over its chicks” (Devarim 32:11). Rashi explains that the mother eagle is full of pity towards her young and does not enter her nest suddenly. First, she beats and flaps her wings above the nest, in order that her young may awaken and have enough strength to receive her.

When the mother eagle teaches its young to fly, she carries them high into the sky. Then she drops her babies! Before they hit the ground, the mother eagle swoops down to catch them. The Akeidas Yitzchak says that Hashem deals with us in a similar way. Hashem gives us trials and tribulations, not as punishments but to educate us and prod us to improve our ways.  (Talelei Oros by Rabbi Yissachar Dov Rubin)

The Talmud (Brachos 7A) says that Moshe questioned Hashem why some good people suffer while other good people prosper. And why do some evil people prosper while others suffer? The Midrash says that after Hashem answered Moshe’s question, Moshe saw a scene unfold in front of him. A weary traveler passed a spring of water and refreshed himself. He continued his journey and did not realize that he had left his wallet near the spring. A second traveler passed by the spring. He saw the wallet and took it for himself. A third traveler then came. He took a drink from the spring and sat down to rest. Meanwhile, the first traveler returned to get his wallet. He asked the third traveler about it, who denied having seen it. The first traveler did not believe him and killed him. Moshe could not understand why Hashem permitted an honest man to be killed while the guilty man went unpunished. It seemed that Hashem was unjust! Hashem explained to Moshe that there was more to the story than he had seen. Hashem went on to explain to Moshe how His actions were totally just and fair. (Talelei Oros by Rabbi Yissachar Dov Rubin) Life is like a jigsaw puzzle. We only see part of the puzzle. Hashem knows the entire picture-past, present, and future.

We all have challenges in life. Some of us seem to have more difficult challenges than others. Perhaps we can feel more supported through our challenges if we realize that Hashem, our Guide, is acting lovingly and for our ultimate benefit. It may also be comforting to know that one day, after 120 years, we will understand why we were given our challenges. When we finally understand the reason for them,

we will be actually be thankful to Hashem for giving them to us.