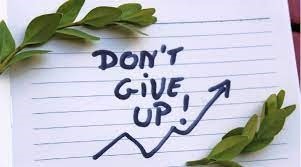 Rabbi Yekusiel Yehudah Halberstam (January 10, 1905 – June 18, 1994) was the founding Rebbe of the Sanz-Klausenburg Chasidic dynasty. He led thousands of followers in the town of Klausenburg, Romania, before World War II. His wife, eleven children and most of his followers were murdered by the Nazis. Nonetheless, he did not lose faith or hope. He did NOT give up! After the war, he continued to serve as an inspirational leader for the Jews in the Displaced Persons camps where he ran soup kitchens, cared for countless orphans, and opened a yeshivah and a Bais Yaakov school.

After the war, he moved to New York, got remarried, and had seven more children. Later, he moved to Israel. He re-established his dynasty in the United States and Israel. He opened numerous yeshivos, established the town of Kiryat Sanz and founded the Sanz Medical Center/Ladiano Hospital.

During the time between Pesach and Shavuos, Rabbi Akiva’s 24,000 students died! Rabbi Akiva could have wallowed in depression and despair from the tragedy of the deaths of his multitude of students. Yet he did not! He accepted the challenge that he was given and persevered, going forward. Rashi (Yevamos 62B) says that because of the deaths, Torah was forgotten. The Talmud says that Rabbi Akiva started all over again and taught Torah to Rabbi Meir, Rabbi Yehuda, Rabbi Yossi, Rabbi Shimon, and Rabbi Elazar ben Shamua. He went from teaching 24,000 students to teaching only 5. Yet, those five students upheld the study of Torah at that time and transmitted the Torah to future generations.

Despite the enormity of the challenges, both Rabbi Akiva and Rabbi Halberstam persevered.

Their actions changed the future path for the Jewish People.

The way we respond to challenges impacts our future path and can also impact the future path for the Jewish People.

The question remains, why did Rabbi Akiva’s students perish?  They were great people! The Talmud (Yevamos 62B) says that they did not show the proper level of respect to each other. Since they were great, more was expected of them, and Hashem judged them very stringently. We can learn from what happened to them how important it is to show respect to one another. Rabbi Yaakov Neiman in his sefer, Darchei Mussar (as quoted by Rabbi Yisroel Beifus in Yalkut Lekach Tov), posits that a lack of respect to one another stems from a lack of faith in Hashem. If one truly believes that Hashem created the world and the focal point of creation is man, who is created in the image of Hashem, then it is impossible not to honor man. One must especially honor a fellow Jew who is considered Hashem’s child. How can one not honor the child of a king? This could be the explanation of the pasuk, “And you should love your friend as yourself, I am Hashem.”  “I am Hashem” is the reason for loving your friend as yourself. That is, since everyone is created in the image of Hashem, when you honor someone, it is as if you are honoring Hashem.

The true test of love for another is if you only notice their positive qualities and not their faults. As it says in Mishlei (10:12) that “love covers up all faults”.

Rabbi Akiva was one who only noticed the positive. The Talmud (Makkos 24A) relates that Rabban Gamliel, Rabbi Elazar ben Azarya, Rabbi Yehoshua, and Rabbi Akiva were walking by the Temple Mount. When they saw a fox emerge from the ruins of the Holy of Holies, they began crying. Rabbi Akiva began laughing. The Sages were surprised at Rabbi Akiva’s reaction. He explained that there were two prophecies that were linked. The first prophecy was that Jerusalem will become a rubble and that foxes will emerge from the Holy of Holies. When Rabbi Akiva saw the foxes emerging from the Holy of Holies, he saw that the first prophecy was fulfilled. That meant that the second prophecy which was dependent on the first, would also be fulfilled. That filled him with hope since the second prophecy was that the Jewish People will return to Jerusalem. “The old men and women will be in the squares of Jerusalem.” “And the squares of the city shall be crowded with boys and girls playing.” (Zecharya 8:4-5)

During this time between Pesach and Shavuos, we should try to imbibe this lesson.

Let us try to honor Hashem by honoring His children and only noticing their positive attributes.
Imagine how much happier we will be!
It will also save us from feeling jealous and from fighting.
It will increase love for our fellow Jew, bringing peace and happiness,
helping to rebuild the Beis HaMikdash speedily, in our day.