Don’t Be a Horse! Remove Your Blinders! 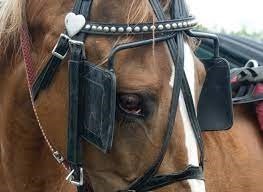 “And you shall sacrifice peace offerings…” (Devarim 27:7)

Blinders are commonly used on horses to prevent them from becoming distracted and losing concentration on the direction that they are supposed to be headed. When horses wear blinders, they are also incapable of seeing the entire picture or landscape. Their sight is limited to what they see directly in front of them.

On November 9–10, 1938, Nazi leaders unleashed a series of pogroms against the Jewish population in Germany and recently incorporated territories. This event came to be called Kristallnacht (The Night of Broken Glass) because of the shattered glass that littered the streets after the vandalism and destruction of Jewish-owned businesses, synagogues, and homes. During the pogrom, some 30,000 Jewish males were rounded up and taken to concentration camps. The increase in the personal assaults on the Jews, the nationwide Kristallnacht pogrom, and the subsequent seizure of Jewish-owned property all caused a flood of visa applications. (Google: Holocaust Encyclopedia)

The events on Kristallnacht were terrible moments for the Jews. I recently heard an insight from Rabbi Leibish Becker, in a weekly Parsha shiur of his. He said that the events of Kristallnacht caused hundreds of thousands of Jews to be saved! How? The Jews had viewed Hitler as a lunatic who would soon be deposed. Once they saw these organized events against the Jews, they realized that Hitler was going to remain in power. Many Jews started to emigrate out of the country.  When horses wear blinders, they are also incapable of seeing the entire picture. They could not have realized that this event was also beneficial.

Sarah lived in an assisted-living facility. One day, her companion noticed that Sarah’s arm had turned a purplish color. No one in the facility attributed any significance to that since discoloration is not uncommon for people on blood-thinner medication. Two weeks later when the arm got worse, Sarah was taken to the hospital. The doctor’s diagnosis was that Sarah had a dislocated shoulder. Unfortunately, too much time had elapsed since the onset of her injury, and the shoulder could not be put back in place. The hospital discharged Sarah. However, the facility that she had come from did not allow her to return. Sarah’s family could not find another suitable facility, so they took her into their home, a one-bedroom apartment. It was crowded and Sarah had many medical needs, but the family was happy to be able to help. A few weeks later, Sarah had a heart-attack and died.  Her family was saddened by her passing. However, they were happy to have had the opportunity to spend those last weeks with her. They realized that the sequence of events which they had thought was bad, had a very positive side to it; Sarah dislocating her shoulder, leaving the assisted-living facility, going to the hospital, being refused entry back into the facility and being unable to find another suitable home, resulted in Sarah living with her family. Sarah was happy to be with her family and her family was happy to have had the opportunity to spend those last few weeks with her. It was time that they all cherished. The horses wearing blinders could not have realized that those events that had occurred, were actually beneficial.

An altar was built on Mt. Eival to sacrifice peace offerings to Hashem.

Why were the sacrifices brought upon the mountain upon which the curses were said? Wouldn’t it have been more appropriate to build the offer on Mt. Gerizim towards which the blessings were said?

Rav Moshe Feinstein zt”l answers, this teaches us a fundamental belief, that everything Hashem does is for our benefit! Even when tragedy strikes, it is for our benefit! The peace offerings were offered on the mountain towards which the curses were said, to show that the Jews understood that even the curses that were said, were for their ultimate benefit. (Talelei Oros by Rabbi Yissachar Dov Rubin).

Hashem loves us more than a parent loves a child. Hashem only wants good for us and all that He does is for our ultimate benefit. We have recently seen many tragedies unfold. We don’t understand them because we our wearing our blinders. When Hashem removes our blinders, we will understand clearly that these events were good, both for those who had to suffer and ultimately for all Klal Yisroel.