You Can Dig A Little Deeper! 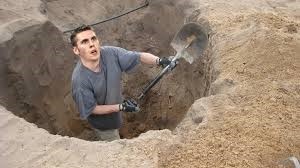 “Hashem did not give you a heart to know and eyes to see and ears to hear until this day”. (Devarim 29:3)

I vaguely recall reading a very fascinating story. Baruch had a desperate need. He approached his rabbi who asked him if he had davened to Hashem. Baruch said that he had. The rabbi then asked Baruch if he had davened with intensity. Baruch said that he had.  The rabbi drove Baruch to a lonely spot in the desert, in the dark of night, and without a cell phone.  The rabbi said he would be back in a few minutes and meanwhile Baruch should daven to Hashem to answer his prayers. The rabbi left Baruch and returned a few minutes later. The rabbi looked at him and said he was going to leave him for a lengthier period. When the rabbi returned and looked at Baruch again, the rabbi shook his head, no. He said that he was going to leave for an even lengthier period. At this point in time, in the dark of night, with the sound of animals in the background, Baruch truly felt that he was alone. No human could help him, and he could only rely on Hashem.  With tears streaming down his face, he davened to Hashem from the depths of his heart. This time, when the rabbi returned, he noticed that Baruch had tear-stained eyes and looked weary as if he had just run a marathon. The rabbi understood that Baruch finally davened to Hashem from the inner depths of his heart. The rabbi felt that these were powerful prayers and took Baruch home, confident that Baruch had done his best.

Moshe Rabbeinu knew Hashem had decreed that he would not enter Eretz Yisroel (the Land of Israel). As the Jews were approaching Eretz Yisroel, Moshe defeated the two powerful giants, Sichon & Og in battle. Since the Jews were about to enter the land, Moshe wondered, if perhaps that meant the decree against him had been lifted. He prayed to Hashem. Hashem responded that the decree still stood, and Moshe was not permitted to lead the Jews into the land. Moshe prayed many times, but Hashem did not remove the decree against him (Devarim Perek 3). The Midrash Rabbah (Devarim 7:10) says that Hashem had made two decrees. One was that the Jewish men would die because they had sinned with the golden calf. (This punishment excluded the women who had neither participated in the sin nor were responsible for stopping it).  The second decree was that Moshe would not enter Eretz Yisroel because of a “sin” that he had done. Hashem had told Moshe to speak to a specific rock, which would then miraculously provide water for the millions of Jews and their animals. Moshe did so. However, instead of speaking to the rock, Moshe hit it. [There is a discussion among the commentators as to what Moshe’s actual sin was.]

Moshe had hinted to the Jews a few times that he would not be leading them into Eretz Yisroel. (Matnos Kehuna & Maharzu in 3:11). Apparently, they did not take the hint. The Maharzu (3:11) says, had they truly and totally loved Moshe then their deep feelings for him would have prompted them to daven for him. Since they did not do it on their own, even after Moshe’s hint, then their prayers would not have sufficed even had Moshe told them explicitly to daven for him.

HaRav Henach Leibowitz zt”l  explains that prayer comes from the heart. There are many different levels of feeling. A prayer is more effective if it comes from the depths of ones’ heart and soul. If it comes from every fiber of our being then it is a more powerful prayer. HaRav Henach Leibowitz says that the Jewish People did love Moshe very much and did pray for him. However, the decree against Moshe was so strong that it required a prayer from greatest depths of their hearts. And that was lacking.

Hashem cherishes and listens to every prayer that we say. Even a prayer that is not said with intensity is valuable. At times, our prayers are more intense and come from the depths of our heart.  Those prayers are more powerful and are more capable of overcoming strong decrees against us. May we take advantage of our “secret weapon”, davening to Hashem with all our heart and all our soul.