Did You See What I See? Why Not? 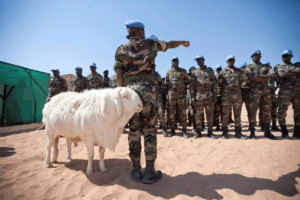 “If you see your friend’s ox or sheep gone astray, do not ignore it; you must take it back to your friend” (Devarim 22:1)

Max had a fight with his boss. He left work very angry. To make matters worse, it was pouring rain. As he was driving home, he sped through a huge puddle, not even noticing that he had drenched a man standing on the corner.

The Talmud (Shabbos 156b) tells a fascinating story. Shmuel, an outstanding Torah Scholar was talking to Avlet, a wise non-Jew who knew how to predict the future by looking at the stars. A group of workers passed them. Avlet pointed to one of the workers, telling Shmuel that according to the stars this worker will be in an accident and will not return alive. Shmuel told Avlet, if the worker was Jewish, he would return alive. He will pray to Hashem or do another mitzvah that will protect him. [Jews are not bound by astrology or laws of nature. A Jew can change a Heavenly decree with repentance, prayer, and tzedakah.] Many hours later Avlet was shocked to see the worker whom he had said would die. Avlet asked the worker to open the bundle on his back where he carried the reeds that he had cut that day. Inside the bundle was a poisonous snake which the worker must have killed unknowingly. Avlet couldn’t understand why the worker was spared from death. Shmuel turned to the worker, who was clearly Jewish and asked him if he had done anything special during the day. The worker said that his fellow workers had the custom to share all the bread that they had brought. They all placed their bread into a basket and divided it evenly. He noticed one of his friends looking sad. Then he noticed that his friend’s lunch bag was empty. Obviously, he was embarrassed that he had no money to buy bread. To save his friend from embarrassment, he took the basket and announced that today he was collecting and dividing the bread. He went around collecting the bread. When he came to his friend (who hadn’t brought any) he put his own bread in the basket, pretending to have taken it from his friend. When he divided the bread, he took a very small portion for himself so that there was enough for everyone. No one else realized that one worker had not given any bread. Shmuel told him that he fulfilled the mitzvah of tzedakah. Doing that mitzvah saved his life.

The Torah gives us a mitzvah to return a lost item. “If you see your friend’s

ox or sheep gone astray, do not ignore it; you must take it back to your friend”. The Ramban points out that this mitzvah had been mentioned previously in Sefer Shmos (23:4) “When you encounter your enemy’s ox or ass wandering, you must take it back to him”. The Ramban points out a few differences in the psukim. One difference is that in Shmos it says Toeh, wandering, which infers that the animal merely wandered off from its path and it is possible to return it to its owner without much effort. Whereas the current pasuk says nidachim, cast off, inferring that the animal ran far away from its owner. Returning such an animal would require great effort.

The Ibn Ezra and the Chizkuni both explain that this mitzvah of returning a lost animal even applies if you are on the way to war! Rabbi Henach Leibowiz zt”l explains that you should imagine that there is a war and you are called to the front lines. You are in a state of emotional duress. You are leaving your family and friends, not knowing if you will ever see them again. You are focused on your objective. You must make it to the front lines. At this time the Torah expects you to do the mitzvah of returning a lost object? You are so distracted, are you expected to even notice the wandering sheep? The answer to both questions is yes. You are always expected to have the presence of mind to notice how you can help others.
Rav Yisroel Salanter once passed a man right before Yom Kippur. He asked the man for the time, but the man was so engrossed in his thoughts of repentance that he didn’t even notice Rav Yisroel. Rav Yisroel felt that this was wrong. Whatever the circumstances, a person should always be conscious if anyone has a need. It could be as simple as noticing a person who needs change, needs a pen, needs a door held open when they are carrying heavy packages, or giving directions to a person who is noticeably unsure of where to go. It could also mean not speaking about a topic in front of someone who may feel bad or sad about that topic.

We must always be sensitive to the needs of others and notice those needs
even at times when we are totally distracted.