I Don’t Agree With You! Let’s Fight! 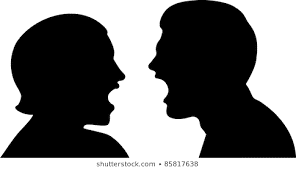 I recently heard a story from Rabbi Dovid Ashear. A woman walked into a bakery in Israel, one erev Shabbos. As she was thinking about what to buy, the salesman told her that there was a special sale and she could get two cakes for the price of one. She liked the idea but said that she only needed one cake. He suggested that she give the second cake to someone else. She said she could give one to her sister, but she did not have the time to bring it to her. When the salesman heard where her sister lived, he said that he lived only a few blocks away and could deliver it for her. He wrote the name and the address. She wrote a note saying, “From your sister.  Have a great Shabbos!” After Shabbos, she was surprised that her sister did not call her to thank her for the cake. She called her sister and was surprised to hear that the cake had not been delivered. The next morning, she called the bakery to find out what had happened. The salesman said that he had delivered the cake to the address she had given him, to her sister on the first floor. She said, “But my sister lives on the third floor!” Apparently, there were two people at that address with the same last name and the cake was delivered to the “wrong” person. This woman got very curious and looked in the phone book for the phone number of the person who did get the cake. She called and asked the woman who answered the phone if she had a received a cake that erev Shabbos. There was a long pause and the sound of crying could be heard. When the woman composed herself, she said that what they got was more than just a cake. Apparently, her husband had not spoken to his sister for over 10 years because of a petty argument. When he saw the cake from “his” sister, he thought she wanted to make peace and renew the relationship. He called his sister to thank her. That phone call was the catalyst in bringing her husband and his sister back to a peaceful and loving relationship.

Machlokes, arguments are terrible. It can break apart friendships and loving relationships.

The verdict was in. He was guilty of murder.  The judge ordered that he be hung, together with his children, ages 8, 6, 2, and 5 months.

We would be astonished if we heard such a verdict. Why were the guilty man’s children also punished? They did not do anything! Yet, this is what occurred in this week’s Parsha. Korach instigated a machlokes, a dispute, against Moshe Rabbeinu. The catalyst of the dispute was jealousy. Korach wanted a prestigious position. He did not receive it because Hashem had told Moshe to give the position to someone else. Korach was very upset and rallied followers against Moshe. Korach claimed that since the entire Jewish People were holy, all had equal rights to get positions of leadership.  Moshe had no right to give all the leadership positions to those whom he chose. Korach denied that Hashem had told Moshe whom to appoint. Korach also mocked Moshe, falsely claiming that Moshe had made up certain mitzvos (see Rashi 16:1). This machlokes was exceedingly serious because it was more than an attack on Moshe.  It was an attack on Hashem and disputed the validity of the Torah.

The Chofetz Chaim zt”l (Sefer Shmiras Halashon, Shar Hazchira perek 15) discusses the severity of machlokes. It is destructive in terms of relationships as well as being spiritually destructive. It can lead to such serious sins as slander, jealousy, hatred, and even embarrassing a person in public. It is so serious that even young children are punished for their parent’s misdeeds. The Chofetz Chaim quotes the Midrash Tanchuma on this parsha showing how severe machlokes is. The Midrash points out that that the Heavenly Court does not punish a child until he is 20 years old. The Jewish courts do not punish a child until the age of bar or bas mitzvah. Yet, even babies that are one day old, are punished due to machlokes.

Dosson and Aviram, the other leaders of this dispute, stood outside their tents with their wives, children, and infants. They were arrogant and steadfast not to give-in to Moshe. Previously, they had told Moshe that they would not meet with Moshe to discuss their position. They said (Bamidbar 15:16), ”…Even if you gouge out our eyes [and blind us], we will not come!” Their refusal to end the machlokes resulted in their entire families – even the babies, being punished by being swallowed up by the earth.

The Chofetz Chaim says, we see that being involved in a machlokes harms one’s own children. Unfortunately, there are people who ignore that fact. A most unbelievable story about this occurred in the Chofetz Chaim’s own town of Radin (as quoted in Rabbi Frand on the Parshah). Two people got into a very heated argument, which got worse and worse. The children of those two people started mysteriously dying. The Chofetz Chaim approached one of the disputants, pleading with him to stop this machlokes. The Chofetz Chaim told the man that his involvement in the machlokes was causing the death of his children! Incredulously, the man refused to back down. He said that he was going to win the argument even if it meant that all his children would die as punishment!!

The Chofetz Chaim continues (Sefer Shmiras Halashon, Shar Hazchira perek 17) that you should not join a machlokes even to side with a close relative or even to side with your father! Even if your father is correct and the other person is in error, you should still not join the machlokes. [Obviously, if you are able, you should try to peacefully resolve and stop the machlokes.] The Midrash Yalkut Shimoni says that this is what saved Korach’s children from being punished and being swallowed up by the earth. They had initially joined their father in the machlokes against Moshe. They were sitting with their father when Moshe approached. They thought to themselves that if they would stand to show honor to Moshe it would be a disgrace to their father. That would be a problem since they had the mitzvah to honor their father. On the other hand, there was a mitzvah to stand for an elder and a Torah scholar.  They decided to stand to show honor to Moshe. At that moment they felt repentance in their hearts. They felt that this machlokes was wrong. Those feelings of repentance saved their lives.

Rav Altar Henach Leibowitz zt”l highlights the obligation to try to stop a feud.  Moshe tried to end the feud by asking Dosson and Aviram, two of the leaders of the feud, to come to him (Bamidbar 16:12). They refused to come. So, Moshe went to them. Rashi quotes the Gemora (Sanhedrin page 110A) that Moshe’s actions teach us not to perpetuate a machlokes. Rashi in Sanhedrin adds that Moshe put aside his own honor, in his attempt to foster peace, by going to the home of the instigators. Rav Altar Henach Leibowitz explains that Moshe’s actions were not merely a praiseworthy action. Rather, he was fulfilling a halachic obligation! Had Moshe not gone, every second of delay would have been considered as if he had perpetuated the machlokes! He would have been going against the Torah that states “…One should not act like Korach and his company” (Bamidbar 17:5. See Rashi). One might have thought that it was beneath the dignity of Moshe, the leader of Klal Yisroel, to go seek out those had started a machlokes with him. We learn from this that Moshe acted properly and was even obligated to do what he had done.

No one benefits from machlokes. Often, machlokes starts from a minor and unimportant disagreement that grows and grows into a full-fledged feud. It adds physical stress which is not healthy for a person’s heart. It causes separation between loved ones. It can bring serious harm to one’s children. Furthermore, it is a sin to perpetuate a machlokes. In a machlokes, both sides share some of the blame. However, this machlokes was unique. Moshe was 100% correct! Korach was 100% wrong! If one who was totally right, could initiate an attempt to bring peace then certainly we, who are not 100% right, can initiate the attempt to bring peace.

Initiating peace is more than being nice; it is the halacha!