Peace At All Costs! 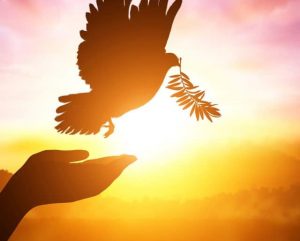 “And the kohain shall write these curses in a scroll, and he shall blot them out into the water of bitterness” (Bamidbar 5:23)

The Midrash Rabbah (Bamidbar 9:20) cites a fascinating story. A certain woman used to attend Rabbi Meir’s weekly Friday evening shiur. One Friday night, the shiur ended a little later than usual. When this woman returned home, her husband asked her where she had been. She replied that she had been at Rabbi Meir’s shiur. Her husband was upset and told her that he would not let her come home until she would spit in Rabbi Meir’s face! The woman returned to the beis medrash to daven to Hashem. Meanwhile, Eliyahu the prophet revealed himself to Rabbi Meir. He told Rabbi Meir what had happened to this woman. When Rabbi Meir saw the woman, he pretended that his eye was bothering him. He asked the woman to please spit into his eye, seven times. When she finished, Rabbi Meir told her to return home and tell her husband the following: “You asked me to spit [in Rabbi Meir’s face] once, but I did it seven times!”

Rabbi Meir’s actions disturbed his students. They felt that allowing the woman to spit in his face was a degradation of Torah. Rabbi Meir responded that he had learned from Hashem to forego his own honor to bring peace between a husband and wife. Where did Rabbi Meir learn this?
From the story of the sotah, in this week’s parsha. The Torah discusses a case in which a husband was suspicious of his wife’s fidelity and told her not to seclude herself with a specific man. Yet, she ignored him and secluded herself (the rabbinic prohibition of not secluding oneself in a room with the opposite gender was instituted later, during the time of King David). Her husband then brought her to the kohain. If the woman did not admit her guilt, that she had not been faithful to her husband, she had to drink a special drink. It was a mixture of water, taken from the kiyor, together with some dirt from the floor of the Beis Hamikdash. In that mixture was a parchment, containing some psukim, including Hashem’s Holy Name. If the woman was guilty, her stomach swelled up and she died. [The waters of the sotah would only affect her if her husband had been faithful to her]. If she was innocent, then she returned to her husband. Hashem said that he would grant her children as a reward for the shame that she had suffered (Ibn Ezra). If she had difficult childbirths in the past, then future childbirths would more comfortable. She may also give birth to children who were more beautiful (Rashi). Drinking this potion and remaining alive proved beyond a doubt that she was free of guilt and her husband could take her back as a wife. Although it is normally prohibited to erase Hashem’s name, Hashem permitted His Holy Name to be erased to bring peace between husband and wife. This was the lesson that Rabbi Meir learned from the Torah. To foster peace between husband and wife, one should be willing to forego his own personal honor, even the honor of one representing Torah.

Although it may be difficult, sometimes a husband or wife must forego slights to their personal honor for the sake of peace.

Although guiltless of infidelity, the sotah still acted inappropriately. She secluded herself in a room with a man, after her husband had told her not to. Even for such a woman, Hashem permitted His Holy Name to be erased, to bring peace between the couple.

Aharon Hakohain also loved peace and actively pursued it (Pirkei Avos (1:12)). He had been anointed Kohain Gadol by Hashem. In many ways he was as great as Moshe Rabbeinu. Yet he was willing to sacrifice his personal prestige for the sake of peace.

The Talmud (Kallah Rabbasi Perek 3) tells us that when Aharon heard that two men had quarreled, he would go to one and say to him, “Peace be upon you, my master!” to which the man replied, “Peace be upon you, my master and teacher! What does my master seek here?” Then Aharon said, “Your friend sent me to you to appease you. He said, “I have offended my friend”. The man was so impressed that such a righteous man as Aharon had come to appease him. He said to Aharon, “Master, it was I who offended him”. Aharon went to the other man and said the same to him. When the two men met, they would ask each other for forgiveness. Similarly, when Aharon heard of a husband and wife who had quarreled, he would go out of his way to make peace.

Aharon’s actions earned him the love of the entire Jewish nation. In fact, after his death the entire Jewish People, both men and women, mourned him (Bamidbar 20:29) whereas by Moshe’s death, only the men mourned (Devarim 34:8).

Many couples whose marriages had been strengthened by Aharon, showed their gratitude by naming their next son after him. At Aharon’s funeral, there were 80,000 other “Aharon’s” that walked behind him in the funeral procession (Kallah Rabbasi Perek 3).

Both Aharon Hakohain and Rabbi Meir learned their lesson from Hashem. It is a lesson for all of us.

To foster peace between two people or between husband and wife, one should be willing to forego his own personal honor.