If You See Something, Say Something! 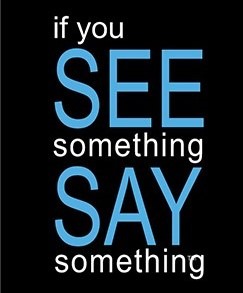 “Pinchas … has turned away My anger from the children of Israel, in that he was very jealous for My sake among them….” (Bamidbar 25:11)

According to the Department of Homeland Security, “…as you are going about your day, if you see something that doesn’t seem quite right, say something. By being alert and reporting suspicious activity to your local law enforcement, you can protect your family, neighbors, and community”.

Alexander Ciccolo was arrested by FBI agents on July 4, 2015 in Adams, Massachusetts, with a knife tucked in his belt. He was carrying a duffel bag with two handguns and two rifles that he had just picked up from a confidential human source. He was headed back to his apartment, where law enforcement would find partially constructed Molotov cocktails, two machetes, and a pressure-cooker that could be used to construct an improvised explosive device like the ones detonated two years earlier at the Boston Marathon. Ciccolo had been looking for ways to inflict the most bodily harm with an attack. The reason no one was ever wounded by one of his explosives or struck by bullets from that cache of guns is because Ciccolo’s father tipped off the FBI about his son’s growing ISIS obsession. He saw something and said something and saved lives.

On May 5, 2010, Faisal Shahzad of Bridgeport, Conn., parked a blue Nissan Pathfinder near the Minskoff Theatre in New York’s Times Square and left the vehicle running with the emergency lights blinking. Packed in the rear of the SUV were 250 pounds of fertilizer, three 20-gallon propane tanks, two 5-gallon gas cans, dozens of M-88 firecrackers, gunpowder and two alarm clocks intended to trigger the concoction. Just two minutes after the car bomb was deployed, though, alert street vendors noticed something amiss. They called the police. They saw something and said something and saved lives.

The Jewish People had witnessed a terrible sin of immorality between Zimri, the Prince of the tribe of Shimon, and Kozbi, a princess of Moav. Not a single Jew protested (there are various explanations as to why not). The Jewish People are like “one being” and are responsible for one another. If one sins, his fellow Jew is usually obligated to say something to him. Since not a single Jew protested, they were all somewhat culpable in the sin. Therefore, they were all guilty to be punished. A plague started killing Jews. They saw something and said nothing and were guilty to be punished.

At that point, Pinchas acted. To stop this public desecration of Hashem’s name and to stop the plague, Pinchas killed both Zimri and Kozbi. He acted without any thought for his own personal safety. In fact, Hashem performed numerous miracles, saving the life of Pinchas and ensuring his success.

Pinchas had another thought in mind. He wanted Hashem to forgive the Jewish People for their silence. In order to accomplish that, the Sforno says that Pinchas made a point of killing Zimri and Kozbi in front of the Jewish People. If the Jews would remain silent and not protest or try to stop him, they would attain forgiveness for their previous failure of remaining silent and not rebuking the sinners. They saw something and said nothing and attained forgiveness.

The Jewish People are responsible one for the other. If one sees a fellow Jew sin, in many cases he must say something in a nice and respectful way. He should explain to the sinner the beauty of Torah and mitzvos and the importance of following in Hashem’s ways.