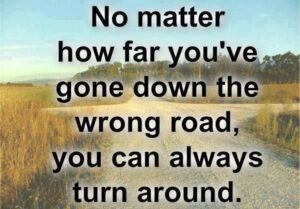 A young man from a fine, religious family in Bnei Brak, strayed from religion and became engaged to a non-Jewish woman. His family was unable to convince him to break-off the relationship. Once, he agreed to visit them for Shabbos, on the condition that they would not force him to observe Shabbos. Surprisingly, he agreed to go to hear HaRav Aharon Leib Shteinman zt”l speak.  After the class, the young man spoke to HaRav Shteinman.  He told the Rav that he hadn’t observed Shabbos for two years. HaRav Shteinman asked, “During that time, did you ever regret the fact that you were profaning Shabbos?”  The young man said that he had regretted it four different times.  HaRav Shteinman continued, “For how long, each time, did you regret not observing Shabbos?” The young man responded that each time he felt bad for ten minutes. Harav Shteinman then said something to the young man that reached the depths of his heart. “For 40 minutes, during the past 2 years you were a true baal teshuvah, returning closer to Hashem. Chazal (our Rabbis) teach that where baalei teshuvah stand, even righteous people are unable to stand. One who returns closer to Hashem, in some ways is considered greater than tzadikim.  It is for that reason that I envy you.” HaRav Shteinman’s words entered this young man’s heart. Ever so slowly the young man broke his engagement and became religious again. (Peninim on the Torah by Rabbi L. Scheinbaum).

Rabbi Levi Yitzchok of Berditchev zt”l once approached a man who had sinned greatly in his life. He said, “I am envious of you. If you will repent and return to the Almighty, with love and sincerity, all your blemishes will be transformed into a great shining light. I envy the brilliance of that light.” (quoted in Growth Through Torah by Rabbi Zelig Pliskin).

The pasuk above (Devarim 13:15) uses the word “acharei”, to denote “after”. Rashi explains (Devarim 11:30) that the Hebrew word “achar” means “after”, while the word “acharai” means “a lot after”; “a distance away”. The Chofetz Chaim zt”l said that this pasuk is telling us to follow Hashem. The pasuk should use the word “achar”, that we should follow closely “after” Hashem. Why does the pasuk say “acharei”, that we should follow Hashem from a far distance away? The Chofetz Chaim learns a beautiful lesson from this. A person should never feel that it is hopeless to come close to Hashem. Even if he feels that he is “acharei”, that he has sinned greatly and is currently very far from Hashem, he can still come close (Biurei Chofetz Chaim Al HaTorah, by Rabbi Yisroel Yosef Braunstein)

There are times that a person has sinned so greatly, that he erroneously feels that he has sunk so low that Hashem is no longer interested in his closeness. Nothing is further from the truth! Hashem is like a loving father. He is waiting with open arms for us to repent our actions, improve ourselves, and return to Him.