We Don’t Live in a Bubble! 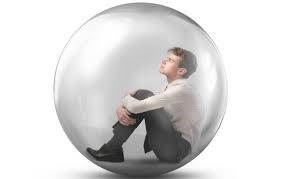 The Talmud (Shabbos 33B) relates that Rabbi Shimon bar Yocḥai and his son, Rabbi Elazar, had to escape for their lives as the Romans wanted to kill them. They hid in a cave. Hashem made a miracle and created a carob tree and a spring of water to provide for their needs. They davened and then learned Torah all day. They stayed in the cave for twelve years, until Eliyahi Hanavi came and told them that the Roman Emperor had died, and the decree of their death had been rescinded. After Rabbi Shimon bar Yocḥai and Rabbi Elazar left the cave, they saw people plowing and sowing their fields. They couldn’t understand why people were “wasting their time” plowing, and not learning. “Rabbi Shimon bar Yocḥai said: These people abandon eternal life of Torah study and engage in temporal life for their own sustenance”. The Gemara says that every place that Rabbi Shimon and Rabbi Elazar directed their eyes to, was immediately burned. They heard a Divine Voice who said, “Did you emerge from the cave to destroy My world? Return to your cave!” They returned to the cave and stayed there for another year. They emerged on an erev Shabbos. They saw an elderly man holding two bundles of myrtle branches and running at twilight. They asked him, “Why do you have these?” He responded, “In honor of Shabbos”. One bundle corresponded to, “Remember the Shabbos day, to keep it holy” (Shmos 20:8). The second one corresponded to, “Observe the Shabbos day, to keep it holy” (Devarim 5:12). Rabbi Shimon turned and said to his son, “See how beloved the mitzvos are to Israel”. Their minds were put at ease, and they were no longer as upset that people were not engaged in Torah study. They saw that people can be involved in mundane activities yet still be focused on serving Hashem.

We all know the story of the spies. Hashem took us out of Egypt, gave us the Torah, and was poised to take us into Eretz Yisroel. Before we went into Eretz Yisroel, we wanted to send spies to check things out. Moshe acquiesced and sent very righteous individuals to do the job. The spies went, returned, and reported that the task was too daunting. They saw numerous funerals and determined that the environment was too harsh. The nations who lived there were very powerful. They also saw giants there. The Jewish People were scared, felt depressed, and cried the entire night. Hashem said that their crying had no basis. As a result of their lack of faith in Hashem, all the males who were then between the ages of twenty and sixty years old, would die in the desert. The Jewish People would remain in the desert for 40 years, before being permitted to enter Eretz Yisroel. The world would not be perfected, and the era of Moshiach would be postponed.

There are many interpretations explaining the sin of the spies. Most of the interpretations view the spies in a negative light. One explanation is that although they were told to report the facts, they were not supposed to add their personal opinions as to whether the Jewish People could succeed in conquering the land. Another explanation is that their appointment to the very important task of spying-out the land, caused them to feel a degree of arrogance, which colored their objectiveness. Others say that their objectiveness was colored because they were afraid that they would lose their leadership positions once the Jews entered the land. Another explanation is that, as representatives of Hashem, they should not have minimized themselves by saying that they felt like ants when compared to the giants.

The Chiddushei HaRim (Parshas Shelach) questions many of the above commentaries and explains that the sin of the spies did not stem from a bad character trait. Rather, it stemmed from their righteousness! Life in the dessert was like a utopia! The Jews had no need to work for food or shelter, as Hashem provided them with both. They had the mann for food and the clouds of Glory sheltered them from the elements. Their clothes grew with them. Since all their needs were provided for, they had nothing to distract them from growing ever closer to Hashem. They could raise their level of spirituality higher and higher. The spies realized that this would all change when the Jews entered Eretz Yisroel. They would not be living on miracles. They would have to work hard for a living, working the fields. The spies were worried that the need to focus on daily needs would cause a steep spiritual decline amongst the people. Thus, they felt that it was not a good idea to enter Eretz Yisroel.

Although their motivation was noble, they made a major mistake. It was Hashem who wanted the Jews to go into Eretz Yisroel. Hashem understood what the challenges would be. Hashem clearly wanted the Jewish People to be challenged, to struggle, yet maintain their spiritual standing.

The Torah (Shmos 22:30) says,”You [the Jewish People] shall be Men of Holiness to Me [Hashem]”. The Kotzker Rebbe emphasizes the word “Men”. Hashem is not looking for us to be angels, 100% perfect.

Hashem made us human, with challenges and enticements.

Hashem wants & expects us to overcome them and become holy.

Hashem knows that we can do it!

Based on a dvar Torah by Rabbi Yissocher Frand from Rabbi Frand on the Parashah 3.