The Scorpion Did NOT Have to Sting the Frog! 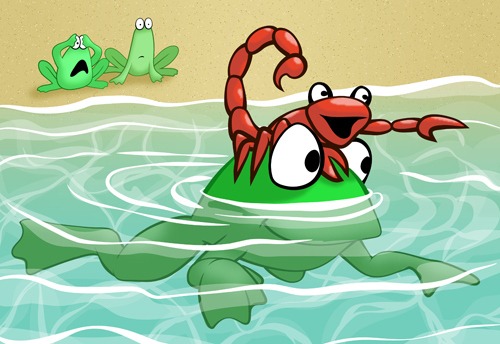 “And a new king arose over Egypt, one who did not know Yosef. And he said to his People… let us deal wisely with the Jews…” (Shmos 1:8-10)

A scorpion asked a frog to carry it across a river. The frog hesitated, afraid of being stung by the scorpion. The scorpion argued that if it did so, they would both drown. Considering this, the frog agreed. Midway across the river, the scorpion did indeed sting the frog, dooming them both. The frog asked the scorpion why he stung him. The scorpion replied that it was in its nature to do so and he couldn’t change his nature.

After Yosef’s brothers and their generation passed away, the Jews multiplied in droves. The women gave birth to six children at a time. The Egyptian people were concerned that the Jewish People were more numerous than they were. According to the Midrash, the Egyptians approached Pharoh to devise a plan against the Jews. Pharoh replied, “How can we harm the Jews? We are only alive because of them! If not for Yosef, we wouldn’t be alive today”. That answer wasn’t acceptable to the Egyptians and they deposed Pharoh from his throne for three months. After that time, Pharoh wanted his throne back so he said, “Whatever you want to do [to the Jews], I am with you”. At that point, Pharoh was reinstated to the throne.

From that point on, Pharoh took the lead in formulating a wise and devastating plan against the Jews. The Ramban says that Pharoh’s goal was not slave labor in order to keep the Jews in check. Rather, the goal was the total extermination of the Jewish people!

Initially, Pharoh’s heart was full of kindness and appreciation to the Jews. After he was restored to the throne, he underwent a major change and became their leading tormentor.

Rabbi Leib Chasman (the mashgiach, the spiritual mentor, in Telz Yeshiva and later, in Chevron Yeshiva), as quoted in Talelei Oros, points out that Pharoh’s total transformation of his character illustrates something important about people. The scorpion’s response to the frog (that it was in its nature to sting others and he couldn’t change his nature) was incorrect. We do, indeed, have the power to change our nature! It is false to say, “I have a bad character trait but what can I do? This is my nature and I can’t change it.”

If a person truly desires to, he CAN make major changes in his personality.