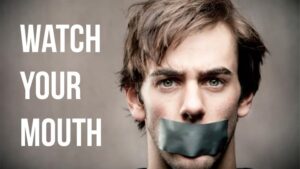 ”Moshe was frightened and he thought, “Indeed the matter is known!” (Shmos 2:14)

I had $100,000 in the bank account. I went to the bank to take out the money to use as a down payment on a house. When I gave the teller the withdrawal slip, she told me that I only had $20 left in the account. I worked hard and saved for many years. What happened to all my money?!

How was the Rabbi’s speech today? You know, I love the Rabbi, but his speeches are so boring!

I overheard the boss today. Do you want to know what he said about the group working on the project? Boy, are they in trouble!

I do not think that this shidduch is for you. I do not have firsthand knowledge, but my sister-in-law heard some negative things from her neighbor.

When he passed by, I turned to my friend. I did not say anything, I just wrinkled my nose and gave a look of disgust.

He turned to his wife and told her that the storekeeper cheated one of his customers.

Moshe could not understand why the Jews were suffering so terribly in Egypt. The Sifsei Chachamim (Shmos 2:14) explains, Moshe knew that Hashem had already told Avraham that his children would be slaves and would suffer affliction for 400 years. That, however, did not explain why the Jews had to suffer so horrifically or why the servitude was so harsh (“avodas perech”).

Then, an event occurred which opened Moshe’s eyes to the answer as to why this was happening to the Jews. Moshe had killed an evil Egyptian taskmaster who had snuck into a Jewish home and had accosted a Jewish woman (Astonishingly, this was the only time this ever happened during the entire time that the Jews were enslaved by the Egyptians). The next morning, Moshe saw this terrible Egyptian taskmaster mercilessly beating a Jew. After looking into the future and seeing that no good person would ever come from this Egyptian man, Moshe killed this Egyptian by saying one of Hashem’s holy names (The commentaries discuss why this Egyptian had incurred the death penalty for his actions.) The following day when Moshe saw two Jews fighting, he tried to stop the fight by telling them that their actions were evil. Immediately, one of the two Jews said to Moshe, “Do you intend to murder me as you had murdered the Egyptian?” Moshe was taken aback. He said to himself, “Indeed the matter is known!” Rashi says that Moshe realized that his act of killing the Egyptian was known to others. Rashi quotes the Midrash that explains, now Moshe understood why the Jews were suffering so terribly in Egypt. “Now, I understand why the Jews are deserving this” because they are speaking loshon hara, slandering fellow Jews. In fact, the two Jews slandered Moshe to Pharaoh. Moshe would have been killed by Pharaoh if not for Hashem’s miraculous intervention.

The Jews were on the 49th level (out of 50) of impurity. They were serving idols (Midrash). Yet Moshe could not understand why they were suffering terribly. Once Moshe saw that there was also the sin of slander, then he understood. The Chofetz Chaim zt”l in Sefer Shmiras Haloshon (Part 2 perek 4) quotes a Zohar that loshon hara awakens accusations in heaven against the Jewish People. Apparently, other sins, even serious ones, do not have the power to bring accusations against the perpetrator and the Jewish People as a whole. Once loshon hara is spoken, it enables all the other sins to accuse the Jews.  The Chofetz Chaim quotes the Midrash (Vayikrah 26:2) that the generation of Achav sinned by serving idols. Yet they were always victorious and never had casualties in battle because they did not speak loshon hara. The people in the generation of King Shaul (see Yefe To’ar) were steeped in Torah learning, yet they had casualties in battle because they sinned with loshon hara. The Matnos Kehuna explains that they were ba’alei loshon hara; they spoke loshon hara regularly. That is what the pasuk means, “Indeed the matter is known!” The loshon hara allowed the severe sin of serving idols to be known. Now the sin of serving idols was able to stand in accusation against the Jews. Now Moshe understood why the Jews deserved such harsh treatment by the Egyptians.

The sin of speaking loshon hara is very severe, especially if one habitually speaks loshon hara. The Chofetz Chaim zt”l in the sefer Shmiras Haloshon (Sha’ar Zechira perek 3) quotes the Chovos Halevavos of Rabbeinu Bechaya (Sha’ar Hachniya perek 7, at the end of hasiman hashlishi) who writes about the terrible shock that awaits one who speaks loshon hara habitually. When he is judged, after he dies, he will be shown his mitzvos and his sins. He will notice, to his great chagrin, that many mitzvos that he had done in his lifetime are no longer there. In addition, there are sins recorded that he had never done. What happened?!! When he habitually spoke loshon hara about another person, his mitzvos were transferred to that person. In addition, that person’s sins were transferred to him.

We are rewarded for every second that we can restrain ourselves.

and along with that, may Hashem protect us from speaking loshon hara.