A Lesson in Life Courtesy of “Professor” Ant 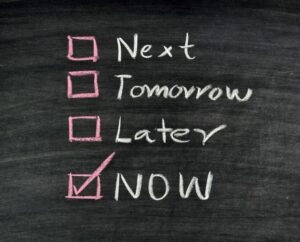 Pirkei Avos (Ethics of the Fathers. 2:4) Hillel says, “… do not say when I am free, I will learn for perhaps you will not become free”.
Mishlei (Proverbs 6:6) King Shlomo says, “Go to the ant, O lazy person, regard her ways and be wise.”

We tend to procrastinate, pushing off tasks for later. Sometimes we procrastinate so much that the task NEVER gets done.

“When we first got married, my wife brought home a whiteboard on which we could list the jobs that needed to be done. About a year later it disappeared. Just before our silver wedding anniversary, I found the whiteboard in our garage. There were about 20 jobs on it. None of them had been done – and most of them still needed to be done.”  Steve Swift, Alton, Hampshire as quoted in BBC News Magazine Aug 30, 2012

A prime reason for procrastination is laziness.

The Midrash Yalkut Shimoni quotes Rav Yehoshua the son of Prachiya as saying, “In the future the reshaim who had already passed away will ask Hashem for an opportunity to repent. Hashem will respond to them, ‘Fools! The world that you had been in is compared to a Friday afternoon, while this [eternal] world is compared to Shabbos. If a person doesn’t prepare food before Shabbos, he will have nothing to eat on Shabbos. Similarly, if a person is going on a sea voyage and doesn’t prepare food while still on dry land, what will he eat?  Furthermore, you should have learned from the ant. You didn’t learn from the ant because of your laziness and foolishness, and therefore you didn’t repent while you were still able to’.”

It says in Orchos Tzaddikim (The Ways of the Righteous) that a person should learn from the ant the quality of zeal so that he may save his soul by preparing for Olam Haba (the next, eternal world).

The Talmud tells us that we can learn many good traits by viewing the world around us. Even the miniscule ant can teach diligence to a human being. It busily accumulates thousands of seeds, far beyond its own needs, as a lesson to man to apply himself to a similar diligent accumulation of wisdom and good deeds.

Midrash Rabba (Devorim 4:2) says that an ant only lives for 6 months.

It only eats 1 and ½ grains in its entire lifetime. Yet It spends the entire summer collecting food.  The winter is too cold for it to do so. Rabbi Shimon bar Yochai said that 300 kur of grain, approximately three hundred million grains of wheat were once found in a single ant’s hole!  Therefore, King Shlomo said that a lazy person should view the actions of an ant and prepare mitzvos in this world for the next world.  He should do them while he can just as the ant collects grain when it is able to, during the summer.

Why does the ant accumulate so much more food than it needs? The Midrash continues, that the ant thinks that perhaps Hashem will grant it a longer life. Therefore, it continues gathering in order that it would have the food that it needs.

The likelihood of an ant living longer is doubtful, yet it puts all its efforts into accumulating more food-just in case. Our eternal life in olam haba is a certainty. Surely, we should use all our time in this world to accumulate “food for our soul”.  That spiritual “food” is our Torah learning and our mitzvos.

We, like the ant, should be diligent to use our time in this world to the utmost. We should learn as much Torah and do as many mitzvos as we can.