The Glass Is Always Totally Full! 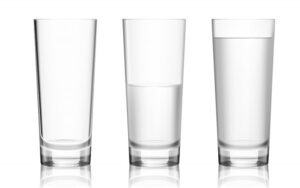 “… and they shall judge the people with righteous judgement.” (Devarim 16:18)

The Torah requires a Jewish justice system be established (Devarim 16:18). Rashi says that the judges should be qualified and righteous and be able to judge honestly. The Midrash Tanchuma (Paragraph 4) quotes Rabbi Yehudah ben Rabbi Shalom who learns from this pasuk that the judges have an additional responsibility. They must intercede before Hashem, on behalf of the Jewish People. They must search for any merits that the Jewish People may have and bring them before Hashem. Rabbi Yehudah ben Rabbi Shalom learns this from the story of Gideon ben Yoash. The Jews had fallen to a low level due to their sins. As a punishment, they were subjugated by the nation of Midian for 7 years. The people of Midian stole their crops and killed their animals. The Jews were reduced to poverty and starvation. According to Rashi, Hashem sent them the prophet Pinchas to encourage the nation to repent from their sins. Pinchas reminded the Jews about all the miracles Hashem had done for their forefathers in rescuing them from Egypt and settling them in the Land of Israel. They should understand Hashem’s power, fear only Hashem and stop sinning by worshipping idols. Then, an angel appeared to Gideon.  Gideon protested to the angel, in defense of the Jews.  Rashi (Devarim 6:13) quotes Gideon’s words. It was Pesach, and Gideon told the angel, “Last night, my father recited the Hallel for me, and I heard him read, “When Yisroel departed from Egypt…the sea observed and fled, the Yardein turned back, etc.” (Tehilim, 114)—but now Hashem has abandoned us. If our forefathers were saintly, let Him act on our behalf in their merit; and if they were wicked, then, just as He worked His wonders for them gratuitously, so, let Him act in our behalf. Where are all His marvels?”

Gideon spoke up to the angel in defense of the Jews. He admitted that the Jews were sinful. However, he claimed that they should be saved just as their unworthy ancestors were saved from the Egyptians. As a result of Gideon’s words, Hashem, Himself, responded to him. “Go in this strength of yours and deliver Israel from the Midianites. I hereby make you, My messenger.”  What strength was Hashem referring to? The Midrash Tanchuma explains that it was the strength of the merit of advocating for the Jewish People. Therefore, Gideon merited to become a shofet, a judge and leader of the Jewish People. Hashem told Gideon to take only 300 soldiers to battle the 135,000 soldiers of Midian. The Jewish army miraculously defeated the army of Midian.

Rav Avraham Pam zt”l (Rav Pam on Chumash by Rabbi Sholom Smith) learns a beautiful lesson from this Midrash. We should learn from Gideon’s actions to speak favorably about our fellow Jews! A father only wants to hear good things about his children. It distresses him to hear bad things. Hashem is our loving father. We do have our faults, but it saddens Hashem to hear negative reports about us. Hashem is grateful when one defends a member of the Jewish People, even if he is unworthy due to his sins.

Rav Pam says, “Jews must look for opportunities to praise the accomplishments of their fellow Jews. Who can estimate the far reaching effect this advocacy will have in heaven and the blessings it will bring upon the Jewish People.”