Look in the Mirror-You Will NOT See Yourself! 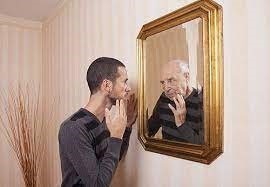 “The kohen shall examine the affection on the skin of the body: …When the kohen sees it, he shall pronounce the person impure”. (Vayikra 13:3)

Rabbi Eliyah of Vilna was known as the Vilna Gaon. He lived in the 1700’s and was one of the greatest rabbis of our century. His influence is still felt in our time. When the Vilna Gaon was in his 70’s, he wrote a letter to Rabbi Yaakov ben Wolf Kranz of Dubno, known as the Dubno Maggid, asking him to travel to Vilna to see him.  The Dubno Maggid was well-known for using parables and stories to teach important Torah concepts. The great Vilna Gaon asked the Dubno Maggid to give him admonition. As great as he was, the Vilna Gaon understood that no one is perfect and that every person needed rebuke in order to correct their faults.

One day, The Vilna Gaon asked the Dubno Maggid to help him avoid arrogant and prideful thoughts.  The Vilna Gaon understood that a genius like himself, who had immense Torah knowledge, apt to feeling that he was better than others.

The Dubno Maggid thought for a moment and told the Vilna Gaon a parable: Once, a number of merchants traveled home from the great Fair in Leipzig, Germany. A wealthy merchant was leading a horse which was pulling a wagon laden with valuable merchandise. As he was walking, he noticed another merchant walking beside him, pushing a cart that was filled with cheap merchandise. The wealthy merchant was incensed. How dare this small-time merchant walk beside him, as if they were equals! He voiced his feelings to the other merchant. The small-time merchant had a quick response. He said, “I know that you are a well-known wealthy merchant. You would have had a reason to be proud had you paid cash for all your merchandise. However, I know that all your purchases were bought on credit, just as all my merchandise was. I only bought a few cheap items. However, you purchased many expensive items. Obviously, your debt to your creditors is much greater than mine. Therefore, remember that you may be richer than I but your burden of debt is much greater”.

The Dubno Maggid continued that in a similar way, Hashem admonished the Jewish king. The king should not think that he was better than his fellow Jews, even he held an important position and was very wealthy. He had to remember that the greater the gifts that Hashem gave him, the greater his debt was to Hashem. When one has greater abilities, Hashem expects more from him. He must be careful not to be overbearing to others and must carefully follow the mitzvos.

The Vilna Gaon understood the Dubno Maggid’s message. Hashem had granted him outstanding gifts. That meant that Hashem expected much more from him than Hashem expected from others. He had no right to feel pride in his accomplishments. (The Maggid of Dubno and his Parables by Benno Heinemann)

This week’s Parsha discusses the disease of tzara’as. This skin disease resulted from a person’s sins, especially that of speaking loshon hara, speaking badly of others. The Torah says (Vayikra 13:3) if a person thought that he had contracted tzara’as, he should go to a Kohen to verify it. If it was indeed tzara’as, the person was declared impure and was sent away, in seclusion, until the tzara’as left.  The Mishna (Negaim 2:5) says that a Kohen who thinks that he himself may have tzara’as must go to another kohen to verify it. Why isn’t the kohen allowed to decide it for himself? The Torah is concerned that the kohen with the tzara’as will be unable to make an unbiased decision to determine if he had tzara’as. Therefore, he has to go to another kohen to make that determination for him.

It is easier to notice the imperfections of others than our own. Even an honest person may often rationalize that he had not done anything wrong. (based on Talelei Oros by Rabbi Yissachar Dov Rubin)

If one truly wants to become a better person, he will be willing to listen to the criticism of others. Some people organize small groups of friends with the intention of hearing constructive criticism of their actions. Their intention is to further perfect their character traits and come closer to Hashem.

Honestly, no one likes to be criticized. When one is criticized, one instantly becomes defensive and is apt to criticize the “attacker”. However, if we are honest with ourselves, we will understand that the way to improve is to listen to the criticism of others. Others can notice faults that we are not aware of or cannot admit to. Obviously, criticism should be gentle and should come from a place of genuine love and caring. This is not an invitation to notice the faults of others and cruelly criticize them.

When we are “open” to hearing constructive criticism, we are opening ourselves to truly improving.