The Key to Success Is….. 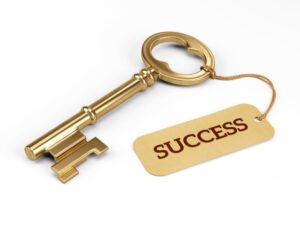 And you shall speak to all that are wise-hearted, whom I have filled with a spirit of wisdom, to make Aaron’s garments… .” (28:3)

HaRav Yehoshua Isaac Shapira zt”l was known as Harav Aizel Charif because of his exceedingly sharp intellect. He was one of the greatest Torah leaders of his generation (in the 1800’s). He once travelled to the yeshiva of Volozhin, the premier yeshiva of his time, to look for a prospective husband for his daughter. He gathered all the students together and asked a very difficult and complicated question. He said that whoever could answer the question would become his son-in-law [the dating and marriage process was very different in those days than in our days]. The students worked for days and nights, thinking how to answer the question. After a few days, they lined up to give their answers. None was able to answer the question. Rav Aizel Charif went into his carriage to return home, without a son-in-law. After his carriage had gone some distance, he heard a voice calling out to stop. One of the boys from the yeshiva was running after the carriage. Rav Aizel thought that the boy had just figured out the answer to the question. The boy said that he didn’t know the answer, but he truly wanted to know what it was. Rav Aizel smiled. This is the boy that he wanted as a son-in-law. One who was a “mevakesh”, one who loved Torah so much that he had an unquenchable thirst to know it. (from sefer Yalkut Lekach Tov by Rabbi Yaakov Yisroel Beyfuss)

Hashem put extra wisdom into the Jews who were “wise-hearted”, enabling them to have the skills to help build the Mishkan, its vessels, and the garments for the kohanim. Rabbi Chaim Shmuelevitz zt”l, the late Rosh HaYeshiva of Yeshivas Mir, questions what qualification was needed to be considered a “wise-hearted” person who had merited to acquire extra wisdom from Hashem? Rabbi Chaim Shmuelevitz zt”l in his sefer, Sichas Mussar, proves from the story of King Solomon that a “wise-hearted” person is one who has a strong desire to acquire wisdom. He is a “mevakesh”. That person will merit the gift of wisdom from Hashem. King Solomon ascended to the throne, becoming the king of the Jewish People, at the age of 12. Hashem appeared to him in a dream, asking what he wanted. Solomon answered that he desired an ”understanding heart”, to be able to judge the people properly. Hashem was very pleased at Solomon’s request. He could have asked for riches or a long life, yet he didn’t. As a reward, Hashem granted Solomon riches and honor and the potential for long life, in addition to unmatched wisdom. Rabbi Chaim Shmuelevitz zt”l explains that King Solomon only merited the gift of profound wisdom because of his great yearning for wisdom. His yearning for wisdom was greater than his desire for wealth, honor, or a long life. A person who has a true and strong yearning for wisdom can merit receiving wisdom from Hashem. It was those Jews who thirsted for wisdom, that Hashem infused with greater wisdom, giving them the knowledge and skills to help build the Mishkan.

To what extent must a person yearn for wisdom to be considered “wise-hearted”? Rabbi Chaim Shmuelevitz zt”l says that we can get a glimpse of the extent, from one who had a strong yearning for honor. Haman had an intense desire for honor. All the people from 127 countries bowed down to him. Only one person, Mordechai did not bow. Since one person did not bow, Haman felt that all the honor of so many people bowing down to him, was worthless.

We can learn from Yehoshua how far a person must go in order to acquire wisdom. When Moshe ascended Har Sinai to receive the 10 Commandments, Yehoshua pitched a tent at the foot of the mountain. He remained alone from his family and friends for 40 days because he wanted to assist Moshe the very second that Moshe descended. Yehoshua was a “mevakesh”. This strong desire to assist Moshe earned Yehoshua the privilege of taking the reins of leadership from Moshe even though there were many thousands of candidates who were greater than he (see Ramban and Bal Haturim in Parshas Shelach). The Sforno (Parshas Pinchas 27:18) compared Yehoshua’s yearning desire, to that of the “wise hearted”. The “wise-hearted” acquired extra wisdom from Hashem because of their burning desire for wisdom. Similarly, Yehoshua achieved a position of leadership because of his burning desire to serve Moshe.

A key to success is to be a true “mevakesh”. If you truly have a burning and yearning desire to do good, you will be rewarded with extra Divine assistance to help you succeed.