Do You Have Five Minutes? It Could change Your Life! 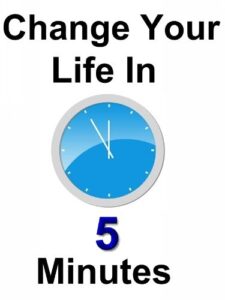 “And Moshe spoke thus to Bnei Yisroel, but they did not listen to Moshe because of shortness of breath and hard work”. (Shmos 6:9)

Rabbi Avraham Pam zt”l gave his son a watch as a bar mitzvah present. He wanted to teach his son the value of time, that time is life!

Moshe returned to Egypt to rescue the Jews from bondage. Hashem told Moshe to tell the Jews that the servitude would end, and they would eventually go to the Land of Israel. The Jews were unable to pay proper attention to Moshe’s message “because of shortness of breath and hard work”. The Vilna Gaon says that the Jews were so busy with a combination of hard work and incessant work that they could not properly hear Moshe’s message of hope and freedom.

The Sefer Talelei Oros, compiled by Rabbi Yissachar Dov Rubin, quotes Rabbi Yitzchak of Volozhin who has a different explanation of the pasuk. After Moshe spoke to the Jews, Hashem told him to speak to Pharaoh. Moshe responded that he had a speech impediment. The Jews did not listen to him, even though he was speaking for their benefit, telling them news of their freedom. Certainly, Pharaoh, their slave-owner, would not listen to him.  Rabbi Yitzchak of Volozhin questions Moshe’s argument. The Torah explained previously that the Jews did not listen to Moshe because they were overburdened with work. That reasoning did not apply to Pharaoh. Why did Moshe assume that Pharaoh would not listen to him?

Rabbi Yitzchak of Volozhin answers this with a parable:

A man visited a prisoner in his jail cell. The man had a very bad stutter and spoke very slowly. The prisoner listened to him half-heartedly. When the prisoner realized that his visitor was speaking about how to secure his release from prison, he started listening to his visitor very carefully, even though it was difficult for him. Had the visitor gone to the warden to discuss the possibility of releasing the prisoner, the warden would not have had the patience to listen to him.

With this parable we can understand the pasuk. The Jews did not listen to Moshe because of their “shortness of breath and hard work”. Their bondage was so severe that they were unable to listen to the speech-impeded Moshe. Moshe told Hashem that if the Jews found it too difficult to listen to him speaking, even though it was for their benefit, then certainly Pharaoh would not have the patience to listen to him.

Pharaoh’s strategy worked. The Jews were so overburdened with work that they were unable to listen to news about their freedom. This is the same strategy that the yetzer hara, evil inclination, uses with us. The Mesilas Yesharim, The Path of the Just, by Rabbi Moshe Chaim Luzatto, says that this is one of the yetzer hara’s strongest tricks. He distracts us and busies us with mundane matters. We get so involved in the unimportant aspects of life that we do not stop to think. We don’t think, what is the purpose of life, why did Hashem create us, what have we accomplished of significance, and how much time is left in our lives to accomplish what is important and eternally precious. If we would take the few minutes to think, the yetzer hara realizes that we will probably make meaningful changes in our path in life and use our time more wisely.