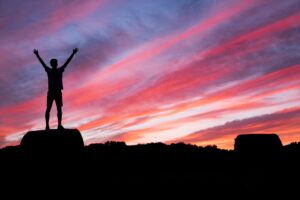 “Take from yourselves a portion for Hashem, everyone whose heart motivates him shall bring it …” (Shmos 35:5)

The Rabbi of the synagogue had just finished speaking. The president stood up and started announcing the pledges for the building fund, for the new synagogue building. Shmuel was very wealthy, yet he was not planning on giving a large donation. The president announced, “Yaakov Cohen pledges $10,000, Reuvein Weiss pledges $10,000, Bernie Gol pledges $10,000, ….” Shmuel heard the names of his wealthy friends pledging large donations. He thought to himself, “How would it look if I am the only one of my friends that does not contribute generously?” Begrudgingly, he raised his hand, also pledging $10,000.

Moshe assembled all the Jewish People telling them that Hashem was giving them the privilege of constructing the Mishkan, the Tabernacle that would contain G-D’s Holy presence. Moshe told them all the materials that were needed and added that “everyone whose heart motivates him shall bring it”. The Kli Yakar explains that apparently, this was a prerequisite. If you did not donate graciously and whole-heartedly, it was not accepted. A donation such as Shmuel’s would not have been accepted.  Rabbi Naftali Tzvi Yehudah Berlin zt”l in his commentary on the Torah, Ha’emek Davar says that the words “he shall bring it” teach us that the donor must bring his donation personally. He may not send it with someone else. The reason is that those who are collecting the donations must ascertain that this donation is being given graciously and wholeheartedly and not due to peer pressure.

Why was it necessary for the donation to be given wholeheartedly? The Chasam Sofer says, everything that we have is from Hashem. When the Jews donated their wealth, it was only as if they were returning what Hashem had given them. The only thing that the Jews could give Hashem was their “hearts”, by donating lovingly and wholeheartedly.

The Ohr HaChaim gives a different explanation. He says that Hashem also donated something to the construction. Hashem gave something intangible, something holy, which brought together all the contributions, sustaining the Mishkan and enabling it to stand. The donor had to elevate his gift to a high, spiritual level so that it could merge with Hashem’s donation.  If the human donor did not possess the graciousness that the Torah describes, then the gift of such a person had no chance of merging with Hashem’s gift.

I had another thought that perhaps may explain why it was necessary for the donation to be given wholeheartedly. The Talmud (Bava Metzia 85B) quotes a story about Rabbi Chiya. Rabbi Chiya told Rabbi Chanina that he was working to ensure that Torah not be forgotten. What did he do? He planted flax. When the flax grew, he would harvest it and would weave it into nets to trap deer. When he caught the deer, he would feed its meat to orphans and would turn the deer skins into parchment. He would write each of the Five Books of the Torah on separate parchments and each of the Six Orders of the Mishna on separate parchments. He would go to a town where there was no one to teach Torah. There, he would teach five children.  He would teach each child one of the Five Books of the Torah. Then he would teach the Six Orders of the Mishnah to six other children. When he completed teaching them, he told them to teach each other, until he returned. Each child eventually learned all the five Books of the Torah as well as the Six Orders of the Mishna. This way, he ensured that the Torah would not be forgotten by the Jewish people.

Why was it necessary for Rabbi Chiya to go to all this trouble to plant, harvest, make nets, catch deer, etc…? Why didn’t he just buy parchment and write the Torah on it? The Maharsha answers that Rav Chiya was starting a new project for the sake of the Torah. He wanted to do every single action for the sake of Hashem and to imbue each action with greater holiness, ensuring a greater chance for success.

Perhaps, each person donating graciously, added to the holiness of Mishkan as it was being built for the first time.

When we embark on a new project, our thoughts and intentions impact the success of the project.
If all of the required actions are done totally for the sake of Hashem, we have a better chance at success.