7 Is My Lucky Number! 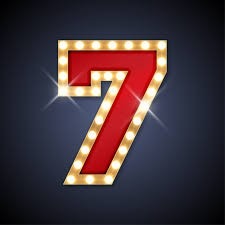 Rabbi Yaakov Kranz zt”l, the Dubno Maggid, said a beautiful parable. Shmuel had to move far from home. He was always anxious to hear the latest happenings from his home and his family who he had to leave behind. Whenever a stranger came to his town, Shmuel asked if he happened to have come from his old hometown. After many months, Shmuel finally found such a person. When he started asking the stranger questions, the stranger said that he did not have the time to answer them since he had to spend the entire day begging for money. Shmuel offered to pay the beggar a full day’s wages, in advance, if he would spend the day with him and tell him about all the happenings in his former hometown. The beggar agreed. He started talking but fell asleep in the middle. When he awoke, he said that he did not have the strength to answer questions because he was so hungry. Shmuel gave him a hearty meal. The beggar then said that he had such a heavy meal that he needed to take a nap before answering any questions. Shmuel lost patience with the beggar. The day was almost over. Shmuel told him that he had paid him for the day and had even given him a sumptuous meal. All that Shmuel wanted was news from his hometown. Yet, all the beggar did was eat, drink, and sleep on a day that should have been totally devoted to Shmuel. (The Maggid of Dubno and his parables by Benno Heinemann)

Hashem gave us the day of Shabbos as an opportunity to devote ourselves to Torah learning and to our families. The physical rest on Shabbos is not a means into itself. It is to give us the strength to use this day as we should. If all we do is eat, drink, and sleep then we have wasted-away the purpose of the day.

At the end of last week’s Parsha, Moshe descended Har Sinai, on the day after Yom Kippur, holding the new set of Luchos. That action signified Hashem’s forgiveness for the sin of the Golden Calf. This week’s Parsha begins with Moshe gathering all the Jewish People. Moshe said to them, “These are the things that Hashem has commanded you to do” (Shmos 35:1). In the very next pasuk, Moshe tells the Jewish People to observe Shabbos on the seventh day of the week. Then Moshe discusses the materials that the Jews were asked to donate to the Mishkan (Tabernacle) as well as the request for volunteers to help make the different parts of the Mishkan.

The Ramban asks why Moshe preceded the discussion of the Mishkan with the law of Shabbos. The Ramban answers that it was to teach the Jews that they should work on the Mishkan during the six days, but not on the seventh day which is holy to Hashem.

The Ohr HaChaim has a different approach as to why the laws of Shabbos are repeated at this point. The Talmud (Horayot 8A) says that one who serves idols is considered as if he had violated all the mitzvos. By serving idols he is implying that he denies the authority of Hashem and His Torah. The Jewish People had been guilty of this sin because they had served the Golden Calf. They needed to rectify this sin and compensate for all the 613 commandments which they had violated. This would have been very difficult, if not impossible. Therefore, Hashem offered them an opportunity to rehabilitate themselves by means of the observance of Shabbos. How would observing the Shabbos properly help them to achieve this forgiveness? The Talmud (Shabbos 118) says that even a person who had been guilty of idolatry is forgiven for his sins when he observes Shabbos according to its laws. The Ben Yehoyada explains that this refers to one who is happy to observe Shabbos, feeling that Shabbos is special and not a burden.

The Chofetz Chaim zt”l quotes the Talmud (Shabbos 10B):  Hashem told Moshe, I have a special gift in my treasure house called Shabbos and I want to give it to the Jews. Please tell them about it. The Chofetz Chaim zt”l says that If a bride returns the gifts given to her by her groom it indicates she no longer wants him and the shidduch is off. Similarly, if we don’t keep Shabbos, it is as if we are returning the gift of Shabbos that Hashem had given us. We are showing that we no longer want to have that connection with Hashem.

The Zera Shimshon (Zera Shimshon by Rabbi Nachman Seltzer) adds that observing Shabbos is very powerful and serves to protect us against our enemies.

Hashem gave us a gift that He treasures, the gift of Shabbos. Let us make the most of this gift by using the day of Shabbos to study Torah and devote ourselves to our families, fostering their spiritual and religious growth.