A New Person, Changed for Life! 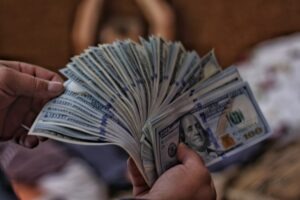 “Yissachar is a large-boned donkey, couching down between the borders” (49:14)

Rabbi Noach Muroff bought a used desk. When he brought the desk home, he realized that it wouldn’t fit through his doorway. He had to pull the desk apart and dismantle the file cabinets. Behind the drawers, he discovered a plastic bag filled with $98,000! He and his wife immediately agreed that it wouldn’t be right to keep the money. Rabbi Muroff called the lady who had sold him the desk to tell her that he had found this money. She was shocked into tears and told him that this was her inheritance money from her deceased parents. She had hidden it a few years ago and had forgotten where. She told Rabbi Muroff that had he kept the money she would never have known. She said, “I don’t know too many people who would have done what you’ve done.” The following day, Rabbi Muroff strapped his young children into the car and brought them along to return the money. He wanted this to be a learning experience for them, to teach them about honesty and doing the right thing. (Yated  Ne’eman Nov 13, 2013) He was asked on the Steve Harvey show if he had any thoughts of keeping the money for himself. He said, “Absolutely not”. He was raised as an orthodox Jew and was taught to be sensitive to how others feel. This story, of the beautiful Kiddush Hashem, reverberated across the world, as almost every news-outlet carried it.

Before dying, Yaakov blessed each of his sons. The blessings related to the life’s goals of each of the sons. According to the Midrash Tanchuma, Yissachar was compared to a donkey, implying that he will produce Torah scholars who will bear the yoke of Torah just as the donkey carries its burden. The Midrash Rabba adds that a donkey does not rebel against its master when he places upon it a heavy burden. Similarly, Yissachar and his descendants will willingly accept the yoke of the Torah from Hashem.

Sefer Lekach Tov quotes Rabbi T. Markowitz who gives a novel explanation. Why was Yissachar compared to a donkey and not a horse? The reason is because of the different way that these animals relax after working. When a horse completes a hard day of work, its owner removes the yoke on the horse’s back and allows it to run free. How does a donkey relax? It lies down in a quiet corner, with the yoke and heavy burden still on its back! This is how one who learns Torah should be. His Torah learning should always be with him and influence his actions, just as the load always stays on the donkey’s back. His Torah learning should be more than simply the intellectual enjoyment of another subject. He should “carry” that learning with him throughout his daily activities, even when he is not learning. All his actions should be done according to the dictates of the Torah. His work and his vacations should be done in the way that the Torah teaches. He should act with integrity and morality. He should be honest in his business dealings and in the workplace and be respectful to others. The famous Greek philosopher, Aristotle, clearly had an understanding that there is a G-D in the world and had a strong opinion on ethics and morality. Yet, he was once caught acting very inappropriately. He was asked, “How could such a great man as you do this?” To that he responded, “Leave me alone, now I am not Aristotle the Philosopher” (quoted in Sefer Lekach Tov). Aristotle felt that “Aristotle the Philosopher” had to behave with high moral standards. Yet, he felt that “Aristotle the Man” could behave immorally.

Our Torah learning is more than an intellectual pursuit. It changes our entire being! It makes us better and changes the way we act in all our daily activities.