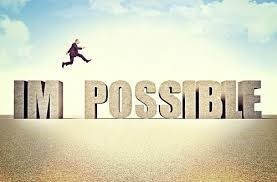 On a dark and cold night in the Jankowska Road Camp, the S.S. and Ukranian guards woke up all the Jewish prisoners. The prisoners were taken to a field where there were two pits. “Each of you dogs who values his miserable life… must jump over one of the pits and land on the other side.” Whoever misses will be shot. It was clear to all the exhausted and emaciated prisoners that this was an impossible task, especially on such a freezing cold night. The pits started filling up with bodies. Rabbi Israel Spira, the Bluzhov Rebbe walked towards the pit, closed his eyes and jumped. When he opened his eyes, he was on the other side of the pit.

Hashem helped Rabbi Spira to do the ”impossible”. (from Hasidic Tales of the Holocaust by Yaffa Eliach)

A few days after having his bris mila, Avraham invited three “Arab” travelers into his home. The travelers were actually angels, disguised as Arabs. After they “ate”, one of the Arabs said that in exactly one year, Sarah will give birth to a boy. Sarah, who was at the entrance, outside the tent, heard these words and laughed. She looked at her aged body and thought that there was no way that she and her aged husband Avraham, could possibly have a child at this point in their lives. Hashem then turned to Avraham, asking why Sarah had laughed. Hashem said, ”Is anything beyond Hashem?” Apparently, Hashem was disturbed by Sarah’s slight lack of belief that she could have a child.

The Ramban questions why Hashem was upset at Sarah’s disbelief. Sarah didn’t know that the guests were angels; she thought that they were Arabs who were trying to say something nice! The Ramban answers that even though it was said by Arabs, Sarah should still have believed that it was possible. Minimally she should have said, “Amen. May it be Hashem’s will [that I have a child].”

HaRav Yechezkel Levenstein zt”l  (in his sefer Ohr Yechezkel, as quoted in Yalkut Lekach Tov by Rabbi Yaakov Yisroel Beifus) explains this Ramban. He says that one who has 1000%, total belief in Hashem is OBLIGATED to believe that Hashem can change Nature for his benefit. Therefore, Sarah should have responded, “Amen. May it be Hashem’s will [that I have a child].” That would have constituted a prayer that Hashem change Nature for her and enable her to give birth.

When we are given an unlikely blessing, we too should respond “Amen. May it be Hashem’s will”, asking Hashem to change Nature to help us.

We see from this that belief in Hashem OBLIGATES us to never give up, however hopeless our situation may seem. As the Talmud (Brachos 10A) quotes, “Even if a sharp sword rests upon a person’s neck he should NEVER despair of mercy.” Hashem can save him in an instant!