Don’t Ever Count Me Out! I May Be Down, But I am Not Out! 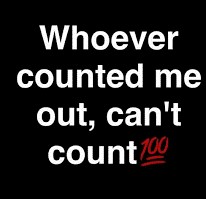 On the last day of Moshe Rabeinu’s life, Hashem told him, “Behold your days are drawing near to die.”

The Midrash (9:6) says that Moshe was disturbed.  He wasn’t necessarily disturbed by the news that he was about to die. Rather, he was disturbed by the manner that Hashem told this to him. He was bothered that Hashem proclaimed his death with the specific word hen, behold. Moshe said to Hashem, “I praised you with the word hen, behold. How can You use that same word to decree my death?” The Midrash says that Moshe praised Hashem, “Behold! To Hashem your G-d, are the heaven and highest heaven, the earth and everything in it”. The Midrash compares this to a person who honored the king by giving him a gift of a sharp sword. The king then turned to his guards and said to cut off this man’s head with the very sword that he gave him as a gift. The man exclaimed in wonderment to the king, “You are cutting off my head with the object that I gave you to honor you?!”  This is how Moshe felt. Hashem answered Moshe’s question. “Don’t you remember that when I sent you to redeem the Jews from Egypt [you refused and] you said, ‘Behold they will not believe me, and they will not listen to my voice’?” Therefore, I am decreeing your death with the word hen, behold.

By using the same word, to decree Moshe’s death, that Moshe had used many years earlier, Hashem was sending Moshe a subtle message. His words about the Jewish People were inappropriate. The Chofetz Chaim (Chofetz Chaim al HaTorah, Shmos 4:1) explains why it was improper. Hashem enlisted Moshe to tell Pharaoh and the Jewish People that it was time to redeem the Jews and take them out of Egypt. Moshe responded that the Jews will not believe him. (There are various explanations to explain why Moshe did not accept Hashem’s assurances that the Jews would listen to him.) The Jews had lived in Egypt, the most immoral country in the world, for over two hundred years.  The Jews who had been influenced by the Egyptians amongst whom they lived, had fallen to the 49th level of spiritual impurity (out of 50 levels). Moshe couldn’t fathom that the Jews would be receptive to him and that his mission would be successful. Moshe erred and exclaimed, “Behold” indicating that he was totally certain that the Jews would not believe him. He should have said that perhaps the Jews will not listen. Therefore, Hashem proclaimed his death with the word “behold” indicating that his death was also a certainty. This was a final “no” from Hashem to Moshe’s request that he be permitted to enter the Land of Israel.

Moshe had falsely suspected that the Jews would not listen to him. Hashem said that the Jews, despite their spiritual decline, were believers, the children of believers. (Talmud Shabbos 97b)

Moshe had underestimated the greatness and holiness inherent in the Jewish People. Even though it may not have been noticeable on the outside, their innate holiness was embedded deep in their hearts. No matter how low a Jew has fallen, one can NEVER give up on him! All it takes is something to ignite the spark of holiness that is found in every single Jew!

Never give up on a Jewish child. Even if he is a weak student or seems to be disinterested, he can succeed. Rav Pam says that often, it is the child who shows the least promise who is the one that succeeds the most since nothing stands in the way of one’s desire to succeed in spiritual matter.