I Am Certain that You Can Do It! 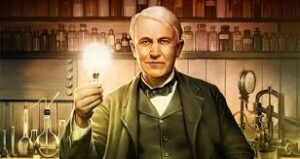 One day, as a small child, Thomas Edison came home from school and gave a paper to his mother. He said to her “Mom, my teacher gave this paper to me and told me only you are to read it. What does it say?” Her eyes welled with tears as she read the letter out loud to her child … “Your son is a genius. This school is too small for him and doesn’t have good enough teachers to train him. Please teach him yourself.” Many years after Edison’s mother had died, he became one of the greatest inventors of the century. One day he was going through a closet, and he found the folded letter that his old teacher wrote his Mother that day. He opened it … The message written on the letter was “Your son is mentally deficient. We cannot let him attend our school anymore. He is expelled.” Edison became emotional reading it and then wrote in his diary:

“Thomas A. Edison was a mentally deficient child whose mother turned him into the genius of the Century.”

A positive word of encouragement can help change anyone’s destiny. (Did Thomas Edison’s Mother Lie About a Letter Expelling Him from School? byAlex Kasprak)

The Talmud (Yoma 86A) quotes Rabbi Levi who said, “Great is repentance, as it reaches the Heavenly throne, as it is stated: ‘Return, Israel, to the Lord your G-D’”(Hosea 14:2). This implies that repentance literally reaches Hashem.

In last week’s Parsha, Moshe gathered the entire Jewish People before Hashem, to bring them into a covenant with Hashem. The Torah (Devarim 29:12) says that if the Jews will remain faithful to Hashem, they will be Hashem’s “people” and Hashem will be “their G-D”. If the Jews falter and serve other gods, the punishment will be severe. However, when the Jews will repent and return to Hashem, Hashem will welcome them with open arms and shower them with much good.

In this week’s Parsha, the Torah (Devarim 31:1-2) begins, “Moshe went and spoke these things to all Israel. He said to them…“ The Kli Yakar asks two questions. The pasuk says that Moshe went. Where did he go? Then the pasuk says that “he spoke”. However, the pasuk does not tell us what he said. What did he say?  The Kli Yakar says that the word “vayedaber”, that he “spoke” is a tougher way of talking. On his last day of life, Moshe gave the Jews mussar. Moshe spoke “words of teshuva”, telling the Jews to repent and come closer to Hashem. “Moshe went”, says the Kli Yakar, to every single tent, to every Jewish home, to tell and exhort them to do teshuva. In the previous parsha, Moshe had already told the Jewish People as a whole, about the importance of teshuva. Yet, Moshe felt it was so important, that he repeated the message to each individual family. [I am not aware of any sin that the Jews had done. Therefore, I assume that the discussion about teshuva refers to a future point in time]

The Ibn Ezra has a different explanation of what the Torah means by the words, “Moshe went”. The Ibn Ezra says that Moshe went to every shevet, tribe, to inform them that he was about to die and that they should not be afraid of what the future portended.

The last day of Moshe’s life was a very busy one. The consummate leader, he didn’t spend the time to take care of his own needs. He wrote 13 sifrei Torah (Midrash Rabba). One was placed in the Aron, in the Mishkan. The other 12 were given to each of the 12 shevatim, ensuring that each tribe would have its own sefer Torah as a guide to follow the proper path in life.

Look at the love and sensitivity that Moshe showed to his people. He knew that he would soon die, and he was busy writing the sifrei Torah. Yet, according to the Ibn Ezra, he stopped to think about others and their feelings. How will the Jewish People feel after I die? They may be afraid about what will happen after their leader dies. Let me console them. Moshe took the time to go to each shevet to comfort them.

According to the Kli Yakar, Moshe went even further. He didn’t just go to each shevet to speak with them. He actually took the time to speak to every individual family. Imagine how valued they felt, getting such personal attention by the greatest leader in history, and only hours before his demise.

We learn from Moshe Rabbeinu’s actions the importance of showing sensitivity to others.

The Chidushei HaRim. (as quoted in Talelei Oros by Rabbi Yissachar Dov Rubin) questions why it was necessary to encourage Yehoshua so many times with the words “Be strong and resolute”. Yehoshua had already proven that he was a capable leader when he led the battle against Amalek.  The Torah had also testified that Yehoshua was “filled with wisdom”. The Chidushei HaRim says that this teaches us an important lesson. No matter how capable a person may be, he can always benefit from words of reassurance and encouragement. Even one as great as Yehoshua could benefit from it.

If even someone as great as Yehoshua could benefit from words of encouragement, how much more so we can also benefit from it. Let’s take this lesson to heart and give words of encouragement to our friends, our acquaintances, our students, our families, and especially to our spouses. Our words will not cost us anything. The benefits will be endless, for others as well as for ourselves.