Take the Rowboat! It was Sent by Hashem 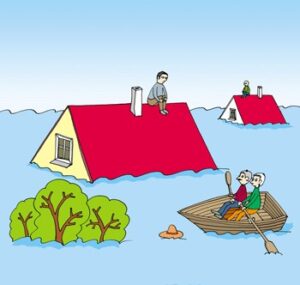 There is a famous story that teaches an important lesson.

In every situation in life, we have an obligation to try our best to succeed. Although we are required to try the best we can, we must realize that our efforts won’t change the outcome. We will succeed only if Hashem wants us to. Yaakov sent Yosef to check on his brothers. Yosef couldn’t find them and was going to return to Yaakov, unable to complete his mission.  However, Hashem had other plans.  Hashem wanted Yosef to succeed in finding his brothers. Therefore, Hashem sent the angel Gavriel to tell Yosef where his brothers were. Hashem set into motion a chain of events that would eventually bring the Jewish People to Egypt.  Initially, Yosef ‘s efforts failed but Hashem caused him to succeed in his mission. Alternatively, there are times that we put in our best efforts and succeed beyond our wildest dreams. We must realize that our efforts did not cause our success. Although we have an obligation of hishtadlus, of trying our best, our success is only due to Hashem.

Yosef was falsely accused of a crime and was put into prison. Later, the King’s butler and baker were also put into prison. One morning, Yosef questioned the troubled looks that he noticed on their faces. They were both disturbed by their dreams. Yosef explained the meaning of their dreams. He told the butler that Pharaoh was going to free him in three days. Yosef asked the butler to please put in a good word for him to Pharaoh, as he was put into prison on false pretenses. The butler was freed but totally forgot about Yosef’s kindness and did not say anything to Pharaoh on his behalf.

Rashi says that Yosef was punished by being confined in prison for two extra years because he asked the butler for help.

Why was Yosef punished? Wasn’t he merely following his obligation of putting in the effort on his own and not just relying on Hashem?

There are many different answers to this question.  Yosef was on a very high level of having faith in Hashem. However, he erred slightly. Rashi says that Yosef erred in relying on help from an arrogant rasha. That wasn’t proper hishtadlus. In a similar vein, the Chazon Ish, Rabbi Avrohom Yishayahu Karelitz (as quoted in sefer Talelei Oros), explains why Yosef’s efforts were improper. One is obligated to put in efforts that have a reasonable chance of success. Acts of desperation are unacceptable efforts because they show a lack of faith in Hashem. Turning to the haughty butler was considered an act of desperation, for the haughty are unlikely to come to the aid of those less fortunate than they. Therefore, Yosef was punished.

Hashem requires us to put in our effort. However, we should never arrogantly feel that our effort led to our success. Our success, as well as anything that happens, is totally dependent upon Hashem.