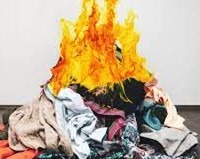 Irit was an irreligious girl, growing up in Israel. When she was a teenager, she received a serious medical diagnosis. At first, she was in shock. After a while, she decided that she wanted to bring a korban, a sacrifice to Hashem. She hoped that in the merit of her “sacrifice” Hashem would heal her. She took all her immodest clothing and put them in a pile. She made a bonfire and burned all those clothes! The next day, March 22, 2009, she went to the mall in Haifa, together with friends, to buy new clothes. When she was at the mall, a miracle occurred. Terrorists had parked an explosive-laden car at the mall. There were enough explosives to cause mass casualties. Miraculously, the car was spotted, and the bomb was diffused. No one was hurt! Irit was convinced that her “sacrifice” to Hashem, had saved her and the many other Jews at the mall. Sometime after that, Irit returned to the doctor and heard that a second miracle had occurred. Her medical condition had cleared up totally! (based on a true story as told by Rabbi Dovid Ashear)

Our forefather Yaakov thought that he was marrying Rochel. In the morning, Yaakov realized that Lavan had tricked him and substituted Leah for Rochel.

The Talmud (Megillah 13B) says that in reward for the modesty shown by Rochel, she merited that King Shaul, who was also modest, should descend from her. The Talmud explains: When Yaakov first met Rochel, he knew that she was destined to be his wife. He asked her to marry him. She said, “Yes, but my father, Lavan, is a swindler, and you will not be able to outwit him”. Yaakov said that he was up to the challenge.  Yaakov asked her what deception Lavan would plan. She said that she had an older sister, Leah, and Lavan would not allow Rochel to marry before Leah did. Therefore, Lavan would try to substitute Leah for Rochel. Yaakov told Rochel certain signs that she should tell him at the wedding. Then he would know for certain that he would be marrying Rochel.

On the day of the wedding, Lavan indeed switched the sisters. Rochel said to herself, “Now my sister will be publicly embarrassed in front of the whole town, for Yaakov will ask her for the signs and she will not know them.” Therefore, Rochel gave Leah the signs. That is what the pasuk means that “in the morning, behold, it was Leah” (Genesis 29:25). Yaakov was given the signs and thought he was marrying Rochel. It wasn’t until morning, that Yaakov realized the deception. Rashi (Megillah 13B) explains that Rochel exhibited tznius, modesty, and therefore merited to have King Shaul as a descendant. What modesty did Rochel exhibit? Rashi explains that Rochel gave the signs to Leah so that Rochel wouldn’t have to publicize the fact that Yaakov had privately given her signs. It would have been a slight breach of modesty to publicize that she and her husband-to-be had a secret between them. Even though it was not the same as revealing any possible love notes between them, revealing the fact that bride and groom had a private secret would have been a lack of modesty.

The Rashash, Rabbi Shalom Sharabi zt’l, asks the following question: The Talmud states that Rochel gave the private signs to Leah to spare her from the embarrassment that would have resulted had the switch been noticed. If so, how can Rashi say that she told her the signs out of a sense of modesty?

Rochel did not choose the first option, as the Talmud explains, because then Leah would have been embarrassed. Rochel discounted the second option because of modesty. She was concerned lest she tell her father, whereupon he may tell others that she and Yaakov had made signs. Therefore, Rochel chose the third option of telling the signs to Leah. Thus, Rashi says that Rochel gave Leah the signs because of modesty. Had Rochel not exhibited modesty, she could have told Lavan that there were signs, instead of telling the signs to Leah. Had Lavan known, he would not have attempted the switch and Leah would not have been in a position to become embarrassed.

We can learn from our Matriarch, Rochel, the extent to which one should go to avoid even the slightest diminution of modesty. Had Rochel told Lavan that she and Yaakov had arranged signs, it wouldn’t have been certain that Lavan would have told anyone about it.  And, even if he would have, it would have only been a minute lessening of modesty. It would not be considered as Rochel, herself publicizing it. She would only have been an indirect cause.  Despite all that, Rochel felt that she could not allow this potential lack of modesty to occur-even though she thought that she was forfeiting the opportunity to marry Yaakov and become one of the Matriarchs of the Jewish people.

The trait of modesty is as essential and special part of the fabric of the Jewish People.

We should be careful not to lessen our modesty even slightly.

as recorded in sefer Chidushei Lev by Rabbi Binyamin Luban