To Bow or Not to Bow. That is the Question! 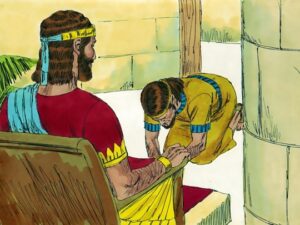 “And he [Yaakov] passed before them [his family] and bowed to the ground seven times until he reached his brother.” (Bereishis 33:3)

My friend was thrown into the kings’ dungeon for a crime that he did not commit. As a punishment, he was going to be hung in the morning. I am a wealthy man. I own much land and have many servants. My servants always do my bidding. When they come to me, they bow down and as they leave me, they also bow down. I have never bowed to anyone in my life. Yet, I had to try to save my friend’s life. Through my business contacts, I was able to arrange an immediate audience with the king. When I entered the throne room, my eyes met the king’s eyes. I could see he realized that I was a rich and influential person. Yet, as I approached the king, I bowed to him and started crying. Each step I took, I bowed, cried, got up, and bowed again. The king was so moved by my actions that he immediately freed my friend. I felt so happy that I was able to humble myself and save my friend’s life!

Yaakov left Lavan’s house and was on the way home, to Eretz Yisroel. He heard that his brother, Esav, was coming to meet him with a large army. Yaakov prepared for the worst. He prepared for the confrontation by readying for battle, davening to Hashem, and preparing a large gift to appease Esav’s anger. When Yaakov saw Esav approach, he walked in front of his wives and children, and bowed to the ground seven times, until he came close to Esav. Rashi says that Esav was moved by Yaakov’s prostrations. Esav’s compassion was aroused by seeing Yaakov bow to him so many times. A battle was averted, and no one was killed.

Rav Levi ben Gershon zt”l, the Ralbag, as well as Rabbeinu Bahya ben Asher question Yaakov’s actions. When a tzadik humbles himself before a rasha, the tzadik diminishes some of his righteousness. If so, how could Yaakov degrade himself so much by bowing down to Esav seven times?!

The Ralbag (Bereishis 32:4 Toeles Vav) answers that Yaakov did not bow down to show subservience to Esav.  Rather, he did so “ba’avur atzmo”. Yaakov did it “for himself”, for his own sake. Yaakov bowed down in the hope that the act of bowing would save either his life or the lives of others. Therefore, it was not considered any degradation to himself. It was actually fulfilling a Torah obligation.

The Ralbag explains that one should overlook his needs and humble himself before his enemy to make peace. That is the proper action to follow according to the dictates of the Torah. If Yaakov would not have bowed, that would have been improper.

Making peace is important, even if we must swallow our pride to do so. When we do so, we are not lowering ourselves. On the contrary, we are fulfilling our obligation from the Torah to make peace.