Are You Protected? I am! 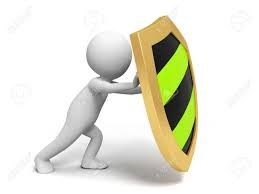 During WWll, Rav Yitzchak Zev Soloveitchik, travelled from Warsaw to Vilna to escape from the advancing Nazis. The roads were full of German soldiers and travel was very dangerous. Keeping the words of Rav Chaim Volozhin in mind, Rav Soloveitchik concentrated on the idea that everything that happens is from Hashem. No human can harm a person unless Hashem wills it. That concentration enabled Rav Soloveitchik to pass by many Nazis, without being harmed. Once, he lost his concentration and was stopped by a German soldier who wanted to kill him. After returning to his thoughts that “there is no other besides Hashem”, the German soldier left abruptly, without harming him. (Sefer Talelei Oros)

One day, a Jewish merchant ran into the home of Rav Yosef Dov Soloveitchik. The Russian police were searching the stores in the area for black market goods. Anyone who was caught would be sent to Siberia. This merchant was terrified because his store was full of such goods. As soon as Rabbi Soloveitchik heard about the danger, he took the sefer Nefesh HaChaim from his shelf and started learning it with the merchant. They reviewed Rabbi Chaim Volozhin’s wonderous segulah to protect one from harm. After learning the sefer for two hours, the merchant’s wife ran into the room, screaming that they were saved. The police had skipped their store. What had happened? The soldiers were about to take a lunch break when they approached the store. They put a mark on the store to remember which store they were up to. After lunch, the soldiers had a quarrel among themselves. Some said that that their mark meant they had not yet checked this store. Others said that it meant that this was the last store that they had already checked. They decided that they had already checked the store. The merchant was spared because of the powerful protection that was taught by Rav Chaim Volozhin!

Rav Chaim Volozhin zt”l wrote in his sefer, Nefesh haChaim, having the awareness that everything comes from Hashem, is a wonderous segulah; It is a very powerful force which can protect us from harm.  The recognition that Hashem is the only power in the world, that no one else can harm us, can help us overcome all of life’s trials and tribulations. Problems that had seemed insurmountable, can disappear.

HaRav Yechezkel Levenstein  zt”l writes that this idea that “there is no other besides Hashem” is a foundation of our emunah, our belief in Hashem. He says that the goal of our tefillah and brachos is to reinforce this idea.

Rev Henach Leibowitz zt”l explains that the Jewish People had various challenges while traveling in the desert, after leaving Egypt. They did not camp in one place. Sometimes their resting place was not comfortable. Sometimes they were there for such a short time that they had no time to settle in, making it difficult to feel relaxed. Despite that, their experience WAS restful because they had total emunah, faith in Hashem.

The Alter of Slobodka zt”l says that Avraham arose early in the morning, on the day that he went to sacrifice his son. That infers that he slept peacefully the night before. How was he able to sleep at all, knowing he would soon be sacrificing his beloved son? The answer is, since he had total faith in Hashem, he was able to feel totally calm, despite the magnitude of his “test”.

Apparently, Hashem gave the power for some forces to harm us. When we concentrate on the fact that Hashem is the only power, that can protect us from these outside forces.

We cannot rely on our money, our political connections, or our health-care system. Rabbi Moshe Chaim Luzatto zt”l says, that all the events that occur in the world are to help us come to this understanding that Hashem can do everything and that there is no other power other than Hashem.