My Dear Watson, Your Logic Is Not So Logical! 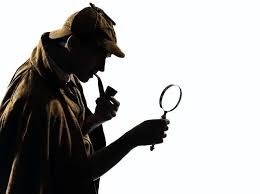 When I was an elementary school student in yeshiva, some of my classmates used to find amusing a sign that was posted just outside the bathroom. It was an ancient Jewish blessing, commonly referred to as asher yatzar. It was supposed to be recited after one relieved oneself. For some grade school children, there could be nothing more strange or ridiculous than to link acts of urination and defecation with holy words that mentioned G-d’s name. Blessings were reserved for prayers, for holy days, or for thanking G-d for food or for some act of deliverance, but surely not for a bodily function that evoked smirks and giggles. In my second year of medical school, I began to understand the appropriateness of this short prayer. I began to no longer take for granted the normalcy of my trips to the bathroom. Instead, I started to realize how many things had to operate just right for these minor interruptions of my daily routine to run smoothly. After seeing patients whose lives revolved around their dialysis machines, and others with colostomies and urinary catheters, I realized how wise the rabbi had been to institute this blessing… There was one unforgettable patient whose story reinforced the truth and beauty of the asher yatzar for me forever. Josh was a 20-year-old student who was in a motor vehicle crash. He nearly died from his injuries. He was initially totally quadriplegic. A long and difficult period of stabilization and rehabilitation followed. But Josh continued to require intermittent catheterization. I know only too well the problems and perils this young man would face for the rest of his life because of a neurogenic bladder. The urologists were very pessimistic about his chances for not requiring catheterization. They had not seen this occur after a spinal cord injury of this severity. Then the impossible happened. I was there the day Josh no longer required a urinary catheter. I thought of the asher yatzar prayer. Pointing out that I could not imagine a more meaningful scenario for its recitation, I suggested to Josh, who was also a yeshiva graduate, that he say the prayer. He agreed. As he recited the ancient bracha, tears welled in my eyes. Josh is my son.

Moshe’s father-in-law, Yisro, brought Moshe’s wife and two sons from Midian to the desert, to meet Moshe. The Torah repeats the names of Moshe’s two sons. Moshe named his first-born Gershom, which means that I was a stranger there. He did so “because he said, ‘I was a stranger in a strange land’”. Moshe named his second son Eliezer which means, My G-D helped me, by saving me from Pharoah. He did so “because the G-D of my fathers rescued me from Pharaoh’s sword”.  The Bal Haturim questions why the Torah added the extra words, “he said” when he named Gershom. Those words were not used when describing the naming of Moshe’s second son. The Bal Haturim explains that these words refer to the Midrash in Parshas Shmos (2:22). Moshe had arrived in Midian after escaping from Egypt with his life. Yisro permitted Moshe to marry his daughter Tziporah on the condition that Moshe permit his first-born son to become an idolatrous priest. Moshe agreed for two reasons. He was a stranger in a strange land and could not refuse Yisro. Furthermore, Moshe was confident that he could convince Yisro of the truth of Judaism and persuade him to convert. The Bal HaTurim says that the words “because he said” refer to Yisro. Yisro had told Moshe that he was a stranger in a land that was not his, and that he did not have the option to refuse Yisro’s demand to send Gershom to learn to become an idolatrous priest.

When Moshe first came to Midian, after escaping from Egypt, Moshe had rescued Yisro’s seven daughters (Shmos 2:16-17). As shepherds of their father’s sheep, they drew water in the troughs to water their flock. The other shepherds drove them away until Moshe interceded.  Firstly, why were Yisro’s daughters the shepherds of his flock? Couldn’t Yisro have hired men to be in charge? Furthermore, why did the shepherds drive Yisro’s daughters away? According to the Ramban, Yisro’s daughters even went to the effort of drawing water and filling-up the water trough. Yet, before their sheep had a chance to drink, the other shepherds came and drove them away. Why? The Midrash Rabba (Shmos 1:32) explains that Yisro had been the head of the idolatrous priests. He came to the realization that all idols are false. He told the townspeople that he was too old to be the priest. They understood that his intent was to renounce the idols.  Consequently, the townspeople excommunicated Yisro and his family. That was why he was unable to get anyone to shepherd his flock and that is why his daughters were driven away from the well.

Rav Chaim Shmulevitz zt”l, Rosh HaYeshiva of the Mirrer Yeshiva in Yerushalayim, offers an insightful answer. Yisro first learned about the different types of idolatry and rejected them all, before arriving at understanding that the Torah was unquestionably the truth. (According to the Maharshal quoted in the Sifsei Chachamim in Shmos 2:16, Yisro did not yet espouse Judaism until he heard about the miracles that Hashem had performed.) Yisro wanted his grandson to follow his path by first learning about all the idols, then rejecting them after realizing that the Torah was the truth. However, Yisro’s idea was flawed. We don’t follow the laws of the Torah because we feel that it is the truth. Rather, we fulfill the mitzvos because Hashem commanded us to do them, and we are Hashem’s servants. As Rabbi Frand says, “When the prohibition is Divine, it is absolute.”

One can totally misconstrue the Torah when he ignores the divinity of the mitzvos and fulfills them solely because he feels that they are the true and logical path in life. For example, the Torah prohibition against murder is very logical. However, there is a danger if one would accept the Torah’s laws only due to logic. One might erroneously decide that it is not considered murder to permit assisted suicide and to allow the elderly to die to save medical resources for those who are younger. In fact, according to the Torah, each moment of life is so precious, and we do all we can to preserve life. (Certain medical issues do come up, such as discussions about end-of-life, issuing a DNR or DNI directive, or palliative care and/or hospice services. There are different considerations depending upon specific circumstances. To find out the proper course to follow according to the Torah, one should contact their orthodox rabbi or the rabbis from the organization Chayim Aruchim [718-278-2446, 24 hours]).

We do not fulfill the mitzvos because they make sense to us.

We do so to follow the will of Hashem!

This dvar Torah was based on Rabbi Frand on the Parashah