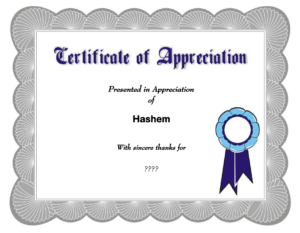 “And Yisro rejoiced over all the good that Hashem had done for the Jews, that he saved them from Egypt. Now I know that Hashem is greater than all idols, for the very thing that they had planned came upon them”. (18;9,11)

There was a very wealthy man living in Pressburg, Slovakia. Although he was blind, he lived alone and took care of himself. A group of robbers wanted to rob him of his wealth. They noticed that he left his home every day at the same time and walked the same route, through a public park. They dug a hole in the middle of the route and covered it with twigs. They figured that the blind man would fall into the hole and hurt his ankle. The robbers would then appear and “kindly” offer to carry the man into his home.  Once inside, they would rob him. The blind man exited his home and began his daily stroll. He took the exact route that he always did. He walked to within ten feet of the hole and inexplicably turned around and returned home. That was something that he had never done before and it saved him from being robbed. He never knew that Hashem had saved him from harm. Rabbi Moshe Sofer zt”l, known as the Chasam Sofer, somehow heard about this story that had occurred in his town. He said that this story illustrates what King David meant in Tehillim (117). King David says that all the nations should praise Hashem’s kindness to the Jewish People. Why should the nations praise Hashem for that which would most likely cause them unhappiness? The Chasam Sofer explains that the nations know that their evil plots against the Jews that didn’t come to fruition because of Hashem’s kindness to the Jews. The nations should praise Hashem because they alone clearly see the hand of Hashem protecting the Jews from harm. (based on a story in the book, Around the Maggid’s Table by Rabbi Paysach Krohn)

How many times does Hashem save us from pain and sorrow that we are not even aware of?

Rashi says that Yisro rejoiced after hearing all that Hashem did to punish Pharaoh and the Egyptians for treating the Jewish People harshly. Furthermore, Yisro said, “Now I know that Hashem is greater than all idols”. What brought Yisro to come to this conclusion? Rashi, explains that it was the way that Hashem punished the Egyptians.  Their punishment wasn’t arbitrary. Rather, it mirrored the evil that they did to the Jews. They were punished by the same means that they used against the Jews. Rav Henach Leibowitz zt”l explains, when one sees the truth in Hashem’s justice it leads one to repentance. In Yisro’s case, it led him to recognize Hashem as the only true Supreme Being. One sees the beauty and righteousness of Hashem’s judgement when the punishment exactly matches the crime. It shows, with clarity, that there is a “master plan” by a true King.

Yisro was privy to information that the Jewish People did not even know. That further impressed him with the greatness of Hashem. The Targum Onkelos explains the pasuk, “Now I know that Hashem is greater than all idols, for the very thing that they had planned came upon them”. Rav Yitzchok Zev Halevi Soloveitchik zt”l  explains the word “planned”. He says that the Egyptians had planned to do many more terrible things to the Jewish People but not all their plans came to fruition. Yet, Hashem still punished the Egyptians for those thoughts! The Talmud, Kiddushin 39, says that Hashem punishes the other nations for their thoughts of harming the Jews, even if their plans don’t get carried out. The Jewish People were not aware of those evil thoughts. However, the Talmud (Sanhedrin 106A) says that Yisro was aware! Yisro was one of Pharaoh’s three advisors and had the inside knowledge of all the Egyptian’s evil plans against the Jewish People. Yisro, alone, was able to appreciate “all” the good that Hashem did for the Jews. Only he could properly praise Hashem for saving the Jews for all the evil that the Egyptians had planned.