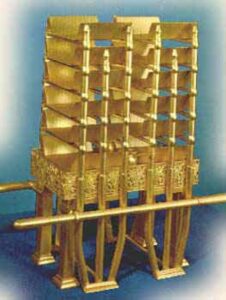 “I bought a donkey. I did not buy a precious gem!” (Midrash Rabbah Eikev 3:3)

There was once a queen in Rome who lost a precious ring, a bracelet, and a necklace. She was very sad because these items were very precious to her. She sent a messenger who went through the streets of Rome proclaiming, “The queen has lost some precious jewels. A generous reward awaits the person who returns them within 30 days! Whoever keeps the jewels beyond 30 days will be punished by death!” The great Rabbi Shmuel bar Susrati happened to find the queen’s jewels. He held the jewels for 30 days and then went to return them to the queen. The queen was amazed. She was very happy to have her jewels returned. But she was angry that they were not returned sooner. She questioned Rabbi Shmuel who told her that he had heard the proclamation yet did not return the jewels sooner. The queen was puzzled until Rabbi Shmuel explained his actions. “I did not want you to think that I returned your jewels to earn the reward or because I am afraid of you. I returned them because in the Torah, my G-D commanded us to return a lost article to its owner.”  The queen realized that Rabbi Shmuel was both honest and righteous.  She said, ”Blessed is the G-D of Israel”. (Jerusalem Talmud Bava Metzia, Chapter 2, as quoted in Our Sages Showed the Way by Yocheved Segal)

In the times of the Beis HaMikdash, shekalim (actually, half-shekalim coins) were collected from most of the Jewish People. The money was used to pay for communal sacrifices that were brought in the Beis HaMikdash. The shekalim were stored in the Temple chamber. Three times during the year the shekalim were withdrawn and placed into three large chests. The one who withdrew the shekalim did not enter the treasury chamber wearing a hemmed cloak, a shoe, or a sandal, or wearing tefillin or an amulet. He did not enter wearing anything wherein he could hide shekalim. The Mishna explains (Shekalim 3:2) the importance of not wearing such items.  If this man would become poor, people might say that he became poor because he sinned by stealing some of the shekalim.  Conversely, if he would become rich, people might say that he became rich from stealing some of the shekalim. The Mishna continues saying that it is one’s obligation to be free of blame before man and before Hashem. As the pasuk says (Bamidbar 32:22), “And you shall be guiltless before Hashem and before the Jewish People”.

The Jerusalem Talmud (Shekalim 5:1:20) as well as the Babylonian Talmud (Yoma 38A) cite a few instances to illustrate this principle. The family of Avtinas were experts in preparing the ketores, the incense that was burned in the Bais HaMikdash. They were the only ones who knew the secret of how to properly prepare it so that its smoke went straight up, like a stick. No woman from this family ever went out wearing perfume. Not only that, but when anyone in this family married a woman from a different family, they stipulated with her that she could not put on perfume. They did this in order that others not suspect them of wrongdoing. They did not want anyone to think that they used the sacred incense to make perfume for their women. This was to confirm what the pasuk said “And you shall be guiltless before Hashem and before the Jewish People”.

It is not sufficient that a person act without sin in the eyes of Hashem. He must also appear upright in the eyes of other people so that they will not suspect him of wrongdoing.

The craftsmen of the House of Garmu made the lechem hapanim, the 12 loaves of bread that were put on the Shulchan, in the Beis HaMikdash. No other family knew the secret of how to make it. No one in this family ever ate bread made from fine flour. They ate only bread made of coarse flour mixed with bran, to fulfill that which is stated, “And you shall be guiltless before Hashem and before the Jewish People”. They did not want people to suspect them of using the recipe of the holy bread to use for their personal use. Not only must one’s behavior be beyond reproach, one should also make certain to be above suspicion.

Wow! The families of Avtinas and Garmu restricted themselves from everyday pleasures! They did so solely to avoid the false impression by cynics, that they were misusing holy items.

These stories highlight the importance of being honest and of acting above suspicion. What a beautiful lesson for us. How careful we must be to avoid the impression of dishonesty, even when doing nothing wrong.

Only when one is guided by Hashem and the Torah, will he see the truth, not rationalize, and do what is honest and proper. Then he will be “guiltless before Hashem and before the Jewish People”.