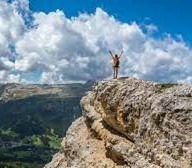 “This day Hashem, your G-d, commands you to perform these laws … observe and perform them with all your heart and all your soul.” (Devarim 26:16)

It Couldn’t Be Done

Somebody said that it couldn’t be done

But he with a chuckle replied

That “maybe it couldn’t,” but he would be one

Who wouldn’t say so till he’d tried.

So he buckled right in with the trace of a grin

On his face. If he worried, he hid it.

He started to sing as he tackled the thing

That couldn’t be done, and he did it!

Somebody scoffed: “Oh, you’ll never do that;

At least no one ever has done it;”

And the first thing we knew he’d begun it.

With a lift of his chin and a bit of a grin,

Without any doubting or quiddit,

He started to sing as he tackled the thing

That couldn’t be done, and he did it.

There are thousands to tell you it cannot be done,

There are thousands to prophesy failure,

There are thousands to point out to you one by one,

The dangers that wait to assail you.

But just buckle in with a bit of a grin,

Just take off your coat and go to it;

Just start in to sing as you tackle the thing

That “cannot be done,” and you’ll do it. (poetryfoundation.org)

A few days before Moshe died, he told the Jewish People to follow Hashem’s laws and perform the mitzvos. Moshe said, “Today, Hashem commands you to perform these laws.” (Devarim 26:16) Many commentaries including Rashi, the Ohr HaChaim and Rabbeinu Bachya ask the obvious question. These laws were given to the Jewish people on Mt. Sinai 40 years earlier! Why, then, is Moshe saying that these laws were given “today”? Rashi explains that Moshe was saying that the commandments should be considered new ones.  They should be beloved as if the Jewish People had only heard them this very day. The Jewish People should not serve Hashem by rote, out of habit. We should serve Hashem with love.

Rabbeinu Bachya says that as time passes, we tend to forget miracles. The Ramban and Rambam say that Hashem’s revelation when giving the Torah at Mt. Sinai was fundamental and foundational to developing our belief in Hashem. The Jews experienced thunder, lightning, and the sound of the shofar getting louder and louder. Hashem opened the heavens and the earth to show that there was no other Creator. Hashem spoke to the Jewish People. The Torah is not requiring us to do the impossible. Our souls experienced the revelations. We CAN feel the event of the giving of the Torah on Mt. Sinai as if we received it right at this moment.  Even though it occurred thousands of years ago, we CAN imagine the emotion of the moment. If we experience this intense emotion and feel that Hashem has just spoken to us, the performance of any and every mitzvah will become easy to do. The mitzvos will take on a new meaning. How can we not do the mitzvos with all our energy and love? Nothing can stand in our way of fulfilling the mitzvos.  This is how we should feel at this very moment. We should feel the intense emotions, the excitement, and the closeness to Hashem. And we CAN do this! That is what the Torah is teaching us.   We can experience the revelation at Mount Sinai every time we do a mitzvah and every time that we learn Torah! We can feel this even when the Jewish people are in exile, and we do not witness open miracles. To reach this level of feeling, we must do what is called Mussar b’hispalus. We must consciously act to draw this intellectual feeling into the fiber of our emotions. We can do so by actively verbalizing this message to ourselves, countless times. We must keep telling ourselves about the wonders of Hashem’s revelation on Mount Sinai and the special closeness we felt to Hashem at that time. In so doing, we are enabling our hearts to “hear” to what our brain already knows.

Every day we can feel as if the Torah has just been given.

We CAN feel the intense emotions and strong love of Hashem.

Mitzvos and Torah learning will take on a new meaning and will be easy to do.